Hitting back at RBI Governor Raghuram Rajan for his ‘schizophrenic’ remark, its Chairman B N Srikrishna… 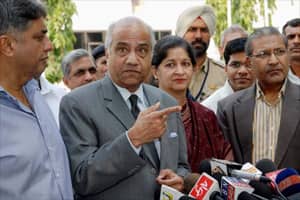 Hitting back at RBI Governor for his views on Financial Sector Legislative Reforms Commission (FSLRC) recommendations, its Chairman B N Srikrishna today said Raghuram Rajan was once in favour of an appellate tribunal but changed his stance after moving to the central bank.

“In his 2009 report ‘A 100 Steps’, Dr Rajan wrote ‘regulatory action should be subject to appeal to the financial sector appellate tribunals’,” Srikrishna said while adding this report was a guiding light for the Commission.

The FSLRC had suggested a non-sectoral, principle-based approach to revamp the existing framework. Among various suggestions, the FSLRC has recommended setting up a unified Financial Sector Appellate Tribunal (FSAT) that would hear all appeals against financial sector regulators.

It had also suggested creation of a unified financial sector regulator comprising SEBI, IRDA, FMC and part of RBI.

Rajan had earlier in June had criticised FSLRC recommendations as “somewhat schizophrenic”.

“On the one hand, it emphasises synergies in bringing together some regulators into one entity. But in the process it suggests breaking up other regulators, with attendant loss of synergies,” Rajan had said.

Noting that frictions are welcome and good for liberal democracy, Srikrishna said “reforms unsettles the powerful, hence it ruffles feathers, but it is necessary and must be done”.

Pitching for a change, he said: “Parts of our regulatory machinery have become brittle, fragile or worse completely irrelevant and utterly useless if not downright harmful to our own interest. It is this concern which motivated the proposed reforms,” he said, highlighting the need to change.

Calling for the need to move away from the reliance on “jugaad”, Srikrishna said, “we must reform in anticipation of future crisis, not only in response to past ones.”

He said our institutions need to be truly world class if we aspire for an exponential growth in our economy in the next 15-20 years.