Puerto Rico’s financial future hung in limbo on Tuesday as economists and officials warned that the US territory could head down Greece’s path if it is not allowed to declare bankruptcy as it struggles with $72 billion in public debt. 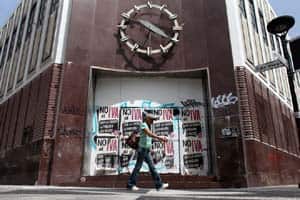 A woman walks in front of a closed down bank in the neighborhood of Rio Piedras in San Juan, Puerto Rico on Monday, June 29, 2015. (Photo: AP)

Puerto Rico’s financial future hung in limbo on Tuesday as economists and officials warned that the US territory could head down Greece’s path if it is not allowed to declare bankruptcy as it struggles with $72 billion in public debt.

The island prepared to close a troubled fiscal year amid intense investor scrutiny just hours before the first of several multimillion-dollar debt payments is due. It remained unclear whether the government would meet the roughly $400 million obligation due Wednesday, obtain yet another extension from creditors, or default.

Gov. Alejandro Garcia Padilla has said that the overall debt is unpayable and that he will seek a moratorium on payments, although it is still unknown whether bondholders will agree to that or opt to resolve the issue in court.

“The bombshells that have come down from Puerto Rico in the last two days have not been particularly well orchestrated,” said David Tawil, co-founder and portfolio manager of New York-based Maglan Capital. “You really don’t do those things without … wanting to shock the market … or preparing the market and gaining consensus.”

Unlike Greece, Puerto Rico cannot seek emergency financing from an institution because it’s a US territory. Some economists say that leaves bankruptcy as the most financially sound alternative, something US rule do not now allow.

“Both are in desperate need of a solution, but neither can access the solution they’re asking for, which is a bankruptcy process,” said Eric LeCompte, executive director of Jubilee USA Network.

He noted that if Puerto Rico were considered a developing country, it would be the eighth most heavily indebted country in the world. If the island does not obtain the right to declare bankruptcy, it will either restructure the debt or go into default, he said.

“That’s going to happen,” he said. “It’s between a rock and a hard place in terms of how to move forward.”

Critics of allowing bankruptcy said that would be unfair to holders of Puerto Rico bonds.

The “proposed solution comes at the expense of seniors and retirees who invested in the island in good faith. Moreover, it does nothing to improve the reckless and even corrupt policies and practices that have left the island all but bankrupt,” the 60 Plus Association, a Virginia-based senior rights group, said in a statement.

Puerto Rico’s governor plans to establish a team to come up with a fiscal and economic reform plan to help jumpstart the island’s economy, which has been in a recession for nearly nine years. The team has until Aug. 30 to develop the plan, which requires legislative approval.

Some economists including LeCompte warned that imposing too many austerity measures could be detrimental.

“The reality is if you’re not going to grow your economy, it doesn’t matter how much you tighten your belt,” he said.

Like Greece, Puerto Rico can extend the life of its loans as well as try to get bondholders to agree to cut the debt by at least half, LeCompte said. Currently, 70 percent of Puerto Rico’s economic output goes toward paying debt, he said.

Bondholders might agree to Garcia’s plan given that it benefits them if the economy grows again, said Sergio Marxuach, policy director at the Center for the New Economy, a Puerto Rico-based think tank. And going to court could be a drawn-out process, he said.

“I’m not saying that they’ve become suddenly nuns, but there’s more of a willingness to negotiate,” he said of bondholders.

The White House says no one is contemplating a federal bailout of Puerto Rico, although it has urged Congress to consider changing the law to allow the island’s government and public agencies to seek bankruptcy protection under Chapter 9.

Puerto Rico might obtain that right if officials realize there is no other solution, said John Mousseau, fixed income director at Florida-based Cumberland Advisors.

“Some people say there’s nothing the federal government can do for Puerto Rico. That’s baloney. It’s clearly at some level a congressional problem that they’re doing nothing about,” he said.

Puerto Rico and Greece do share one disadvantage in fighting economic trouble: They can’t devalue their currencies to give their companies a price advantage in world markets and jump-start economic growth with exports. Puerto Rico uses the US dollar and Greece is one of 19 countries that use the euro.

But Puerto Ricans have an edge over the Greeks in that their economy is fully integrated into the United States. The US government supports Puerto Rico with Social Security and Medicare payments; the Greeks don’t get nearly as much support from European institutions.

“You’ve got a great deal of fiscal transfers that come from Washington that you don’t have in Greece,” said John Chambers, managing director of sovereign ratings at Standard & Poor’s Ratings Services.