Prime Minister to review progress of rail sector next week 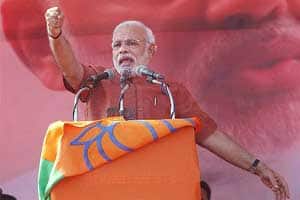 Prime Minister Narendra Modi will review next week the work done on modernisation and expansion of the railways against the backdrop of his unhappiness over the progress in various projects like laying of some new lines and redevelopment of some stations.

He will chair a meeting here on February 9 during which he will take stock of railways along with other infrastructure related ministries, including roads, shipping and civil aviation.

It will be a follow up of a meeting he had taken in December on these infrastructure ministries, an official said.

During that meeting, the Prime Minister had said that the progress in laying new rail lines was “unsatisfactory” and had directed the Railways to speed up work so that construction season is “optimally utilised”.

Modi had noted that other crucial rail projects like construction of three critical coal links and the proposed redevelopement plan for 10 stations was “behind schedule,” and needed to be expedited.

“The progress in development of new lines, doubling, gauge conversion and electrification has not been satisfactory. The construction season must be optimally utilised to achieve substantial progress,” he had said, according to the minutes of the meeting.

Against the backdrop of those remarks by the Prime Minister, a senior Railway Ministry official said, “We have now prioritised certain projects to complete them without much delay.”

These include new lines, doubling and gauge conversion projects which are crucial for capacity enhancement, the official said.

Railways is the thrust area in Modi’s developmental agenda and yesterday he urged ADB chief to take up this sector on priority basis for “visible” impact.

In the last review meeting, Railway Ministry was directed by the Prime Minister to speed up the construction of three critical rail link for coal which was behind the schedule.

“These need to be expedited in close coordination with the concerned state governments. There should be a joint meeting of security agencies, state governments and railways to ensure safety in construction of these rail lines,” Modi had told that meeting.

The government is pushing for speedy construction of rail lines for transportation of coal from mines in Jharkhand, Odisha and Chhattisgarh to fuel-starved power plants in the country.

The then Railway minister Sadananda Gowda, in his railway budget speech on July 8, 2014, had said the government wanted to speed up work on the 90.7-km Tori-Shivpur-Kathautia line (Jharkhand), 53-km Jharsuguda-Barpalli-Sardega line (Odisha) and 180-km Bhupdevpur-Korichapar-Korba (Chattisgarh) line as part of the plan.

However, the projects are behind schedule and not progressing well due to various reasons. “There are certain issues which are now being sorted out,” the official said.

Targeting funds inflow, Modi has asked the national transporter to show some results on the FDI front.

“The project for FDI needs to be worked out in greater details and a list of these projects should be published to generate interest,” the note said.

Though railways have opened up 17 areas for FDI including cleaning operation, installing bio-toilets, setting up mechanised laundries, route electrification and signalling system, nothing much has been achieved so far.

On the proposed station redevelopment plan, Modi had also found that the project is not moving fast enough.

“Redevelopment of 10 stations is for behind schedule. This should be given top priority as it is as important element in railway development. It should be speed up,” he had said.