In a first by an Indian Prime Minsiter, after making a historic visit to Jaffna – a region once ravaged by strife… 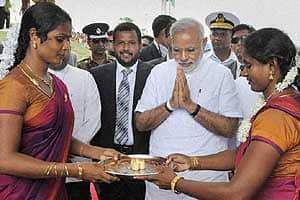 In a first by an Indian Prime Minsiter, after making a historic visit to Jaffna – a region once ravaged by strife – Prime Minister Narendra Modi today called for equitable development and respect for all citizens in Sri Lanka, seen as an oblique reference to Tamils who had suffered during the war between the LTTE and forces.

The meeting took place at the ‘India House’ inside the premises of the Indian High Commission on the last day of Modi’s Sri Lanka visit, the first by an Indian Prime Minister in over 25 years.

The meeting came in the backdrop of Rajapaksa’s accusation that India, the US and European countries had a hand in his humiliating defeat in the January elections.

Rajapaksa, in an interview to the Hong Kong-based South China Morning Post, levelled allegations against the US and India and said they openly used their embassies to bring him down.

The details of today’s meeting between Rajapaksa and Modi were not known.

A reception was also hosted in the Prime Minister’s honour at the High Commission where Modi interacted with the guests.

Winding up his public engagements on his two-day trip to the island with a hugely-symbolic visit to Tamil-dominated Jaffna, he said he was glad that it “is one to wipe tears from the eyes of those who suffered”.

The Prime Minister, who is also the second international leader to visit the region after Premier David Cameron in 2013, handed over 27,000 new homes to Tamils who became homeless during the civil war.

The houses were built with Indian assistance as part of India’s efforts to help in the reconciliation process.

Modi’s visit came a day after he had met President Maithripala Sirisena in Colombo and favoured a life of equality, justice, peace and dignity in a unified Sri Lanka.

He had also urged the Sri Lankan government to ensure early and full implementation of the 13th Amendment relating to devolution of powers to Tamils and to go beyond that in finding a political solution.

Laying the foundation today for a Cultural Centre being built here by India, Modi said, “Sri Lanka should also progress. Unity, peace and amity are essential ingredients for equitable development where there is respect for all citizens.”

Northern Province Chief Minister and Tamil leader C V Wigneswaran, who was present at the event, made a strong pitch for replacing the 13th Amendment with a more dynamic system of devolution of powers.

“13th amendment (to Sri Lankan Constitution) cannot be a final solution,” he said, noting that Modi himself is a proponent of devolution of powers and cooperative federalism.

Earlier, Modi flagged off a train service in the north-western town of Talaimannar — the closest point to India — restored after decades of civil war, completing the reconstruction of the entire Northern Province Railway Line.

At Ilavalai in Jaffna, where India is assisting in a housing project, Modi participated in a housewarming ceremony and lent a helping hand in the traditional milk boiling before a family moved into a new home.

He was received by women who performed the traditional ‘aarti’ to the accompaniment of Nadaswaram music.

The cultural centre which is to be funded by the Indian government is expected to cost Rs 60 crores.

Modi assured the people of Jaffna that the task taken up by India in the construction of the cultural centre will be be completed in time and will exceed their expectations.

“India is proud to have an opportunity to establish a unique and world-level cultural centre in Jaffna. When a library is established, a place where books can be found, it unites the generations,” he said.

Extending his solidarity with the people of Jaffna, Modi said, “Jaffna is making a new mark for itself. The world is experiencing the message of peace from here”.

“Even if I had come here without any scheduled programme, only to bow to this land, it would be a very big thing,” he said.

Referring to the trials and tribulations faced by people of Jaffna, Modi said, “Jaffna has seen several ups and downs. People have faced several difficulties”.

Modi also said that India and Sri Lanka are not just neighbours but have historical links. While in Jaffna, Modi also had a meeting with Wigneswaran at the Jaffna Public Library.

At the function to handover houses, Modi said, “These houses are not merely walls of bricks and stone. These houses are an effort to make the lives of those who have suffered happier.”

“I am glad this programme, my final public programme during my Sri Lanka visit, is one to wipe tears from the eyes of those who suffered,” he said.

Modi said 47,000 homes will be built for the benefit of displaced persons in the next phase, a statement which was greeted by loud cheers from the assembled people.

“This is a unique type of project — owner driven. This idea was started in Gujarat after 2001 earthquake,” he added.

Seeking an action plan to resolve all the problems in the country’s northern and eastern provinces, Wigneswaran said there is a need for creation of “innovative and creative” measure for greater devolution of powers in Sri Lanka. “We seek justice and fair play,” he said.

The Northern Province Chief Minister also said there is need for services of a guarantor on the issue of devolution of powers, adding that India is “best suited” for this role.

Modi flew in here by an IAF chopper after a brief visit to the holy town of Anuradhapura where he offered prayers at the sacred Mahabodhi tree.