Till CAG audit of discoms is made public, Arvind Kejriwal government would provide subsidy to meet its pre-poll promise of cutting tariffs by half. 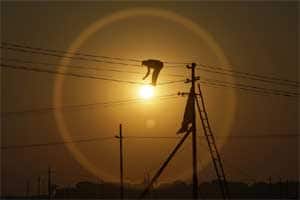 Yadav was speaking at the Idea Exchange programme of the Indian Express Group, along with party colleague Adarsh Shastri.

The 70-point action plan released by AAP talks of a 50% reduction in electricity prices, but has not specified that this will apply only to smaller consumers. A 50% subsidy for all consumers will cost R3,445 crore.

Yadav was confident that once the audit report of the CAG was released, it would find the irregularities AAP had been suspecting. The AAP campaign against the electricity companies overcharging, Yadav said, was not just based on flimsy evidence, there was a detailed working by a former electricity regulator in Delhi. The CAG report is critical since there are ‘regulatory assets’ of R13,000 crore — jargon for power dues to be paid by the consumer — till FY13 and probably another R9,000 crore for FY14 and FY15. Since these will have to be repaid, this will considerably jack up electricity prices — a surcharge of 48 paise is paid at the moment for just the interest cost on the recognised ‘regulatory assets’.

Power companies maintain that while the CAG audit will find nothing irregular, the real issue is the high cost at which they buy power, and that this comprises around 80% of the eventual tariff paid for by the consumer.

In its white paper on electricity, AAP had pointed to high costs of electricity sales by PSUs like NTPC and NHPC — Delhi’s bulk supply tariff is R5.50 per unit compared with R3.70 in Gujarat and an average of R3.70 for 15 major states. Discoms, AAP has said but not explained how, “should purchase power from economical sources and wriggle out of expensive and unsustainable Power Purchase Agreements”. The paper cites the R1.75-6.15 per unit charged by NTPC and the R1.77-12.21 charged by NHPC.

This is something AAP will need to discuss with the central government since the power is supplied by central PSUs, so terminating the contracts is not going to be easy. The same applies to AAP’s other plan, to put up a power station for Delhi at a coal pithead. Yadav added that tapping solar power was another way to reduce power costs in the capital.