Manufacturing sector contracts for first time in over 2 years

Painting a gloomier picture, the survey said that the rate of decline was the sharpest in almost seven years. 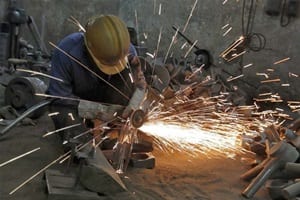 Painting a gloomier picture, the survey said that the rate of decline was the sharpest in almost seven years.

The Nikkei India Manufacturing PMI, a composite monthly indicator of manufacturing performance, dipped from 50.3 in November to 49.1 in December.

The PMI has slipped below the crucial level of 50.0 for the first time since October 2013. A figure above 50 represents expansion while a reading below this level means contraction.

December’s incessant rainfall in Chennai impacted heavily on the sector, with fall in new work leading the companies to scale back output at the sharpest pace since February 2009, the survey said. Incoming new work has also contracted for the first time since October 2013.

“India’s manufacturing sector took a turn for the worse at the year-end, with already-gloomy internal demand further hampered by floods in the south of the country,” Pollyanna De Lima, Economist at Markit and author of the report, said adding that “such was the extent of the decline that the rate of reduction was the sharpest since the financial crisis”.

On the price front, inflation rates of both input costs and output charges were at seven month highs.

“The continued depreciation of the rupee against the US dollar pushed inflation higher, with PMI price indicators pointing to stronger increases in both input prices and output charges,” Lima said.

During 2015, the Consumer Price Inflation has remained well under control hovering in the range of 3.66-5.4 per cent so far in 2015, while the industry chambers and some other experts are hopeful that it would keep below 6 per cent mark in the New Year — a target set by the Reserve Bank.

Another dataset, the Wholesale Price Index (WPI) based inflation in fact stayed in the negative zone for the entire 2015, meaning the wholesale prices actually fell and there was no inflation at all. While it entered the negative zone in November 2014, the WPI inflation stood at (-)3.8 per cent in October 2015.