Prime Minister Narendra Modi on Thursday addressed the inaugural ceremony of the 3rd India-Africa Summit 2015 , which is being held in New Delhi. Here are 10 key highlights from PM Narendra Modi’s speech: 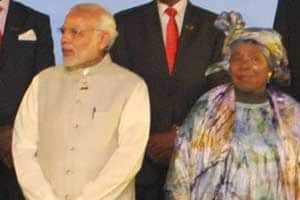 PM Narendra Modi and the leaders of African nations at the inaugural ceremony of the 3rd India Africa Forum Summit 2015, in New Delhi on October 29, 2015. (PIB photo)

Prime Minister Narendra Modi on Thursday addressed the inaugural ceremony of the 3rd India-Africa Summit 2015 , which is being held in New Delhi. PM Modi reflected on the relationship between both India and Africa that stretches back in history and spoke at length about how the current leaders can get together to strengthen it further to improve the lives of the people. Here are 10 key highlights from PM Narendra Modi’s speech at the ceremony:

1) Financial assistance:
Prime Minister Narendra Modi announced concessional credit of $10 million over the next 5 years for Africa. This will be in addition to India’s ongoing credit programme/s.

It will also include 50,000 scholarships in India over the next five years. And, it will support the expansion of the Pan Africa E-Network and institutions of skilling, training and learning across Africa.

Watch: Discussing the significance of the Indo-Africa Forum Summit

India has committed $7.4 billion in concessional credit and $1.2 billion in grants since the first India-Africa Summit in 2008. It is creating 100 capacity building institutions, and developing infrastructure, public transport, clean energy, irrigation, agriculture and manufacturing capacity across Africa.

India and Africa must speak in one voice to effect reform of United Nations, including Security Council.

This is a world of free nations and awakened aspirations. Institutions cannot be representative of the world, if they do not give voice to Africa, with more than a quarter of UN members, or the world’s largest democracy with one-sixth of humanity.

That is why India and Africa must speak in one voice for reforms of the United Nations, including its Security Council.

3) Trade:
In less than a decade, India-Africa trade has more than doubled to over $70 billion. India is now a major source of business investments in Africa. Today, 34 African countries enjoy duty free access to the Indian market.

African energy helps run the engine of the Indian economy; its resources are powering our industries; and, African prosperity offers growing market for Indian products.

In the last three years alone, nearly 25,000 young Africans have been trained and educated in India. They are the 25,000 new links between both.

Development of human capital in every walk of life will be at the heart of the partnership. India will open doors more, it will expand tele-education; and will continue to build institutions in Africa.

India’s expertise in healthcare and affordable medicines can offer new hope in the fight against many diseases; and give a newborn a better chance to survive. India will also collaborate to develop Indian and African treasures of traditional knowledge and medicines.

India will make available space assets and technology and use the possibilities of digital technology to transform development, public services, governance, disaster response, resource management and quality of life.

India will expand and extend the Pan Africa E-Network, conceived by late President A P J Abdul Kalam, which links 48 African countries to India and to each other. This will also help set up Pan Africa Virtual University.

India will work to reduce digital divide within Africa and between Africa and rest of the world.

India-Africa should also achieve a permanent solution on public stockholding for food security and special safeguard mechanism in agriculture for the developing countries.

Today, in many parts of the world, the light of a bright future flickers in the storm of violence and instability. When terror snuffs out life on the streets and beaches, and in malls and schools of Africa, India feels your pain and see the links that unite us against this threat.

India wishes to deepen cooperation in maritime security and hydrography, and countering terrorism and extremism.

India will also provide support for Africa Union’s peacekeeping efforts. And train African peacekeepers here and in Africa. India-Africa grouping must also have a stronger voice in decisions on UN Peacekeeping Missions.