Prime Minister Narendra Modi on Tuesday inaugurated the first phase of the Saurashtra Narmada Avataran for Irrigation (SAUNI) Yojana, which will see Narmada waters fill nearly 10 dams and reservoirs in Rajkot, Jamnagar, Morbi and other parts of Gujarat’s Saurashtra region. 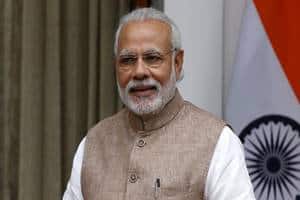 The Japanese MPs conveyed this to the Prime Minister when they met him here as part of Japan-India Parliamentarians' Friendship League (JIPFL). (Source: Reuters)

Prime Minister Narendra Modi on Tuesday inaugurated the first phase of the Saurashtra Narmada Avataran for Irrigation (SAUNI) Yojana, which will see Narmada waters fill nearly 10 dams and reservoirs in Rajkot, Jamnagar, Morbi and other parts of Gujarat’s Saurashtra region.

The R12,000-crore scheme was first launched in 2012 when Modi was the chief minister. The project aims to fill up 115 dams in the region with excess water from the Sardar Sarovar dam in a bid to solve the area’s water crisis. The entire project will require laying a 1,126-km network of pipes, which will allow for irrigation of 11 lakh hectare farmland, according to the Gujarat government.

Addressing a public function after inauguration of the project, Modi said: “When I became the chief minister, I told farmers they should stop agitating for power supply and focus on water and not power. For the initial three years, I could not convince the farmers and even people from my own party.

Today, I want to congratulate the farmers of Gujarat who accepted what I had said, and focussed on water. In the last five to six years, water has been conserved. While levels of water had previously been decreasing, that is no longer the scenario here.”

Calling it a ‘day of pride’, former Gujarat CM Anandiben Patel said: “Our dream is now being fulfilled. We have seen the adverse effects of water shortage in Gujarat. SAUNI Yojana will bring greenery and prosperity in Saurashtra.”

Chief minister Vijay Rupani, who was present on the occasion along with deputy CM Nitin Patel and other senior government officials, credited the Prime Minister for the project. Several leaders of the Hardik Patel-led Patidar Anamat Andolan Samiti (PAAS) were detained by policemen near the venue of the function. They had planned to submit a memorandum to the PM regarding their agitation over the reservation issue.

The link irrigation project will divert one million acre feet of excess floodwaters of the Narmada to 115 reservoirs across 11 districts of Saurashtra. Water from Narmada’s link canals will be lifted using powerful motors and will be pumped ahead into dams, minor canals and rivers.

Modi inaugurated the project from AJI-3 dam which released waters downstream into the Aji river. As part of the SAUNI Yojana’s Link-1, water from the Machhu-II dam in Morbi will be piped to Sani Dam in Devbhumi Dwarka district about 180 km away. Instead of conventional open canals, underground pipe canals of 3mm-500mm diameter each will be used for the project.