“Met with UK Secretary of State for International Trade @AnnieTrev for the launch of India-UK Free Trade Agreement Negotiations,” Goyal said in a tweet. 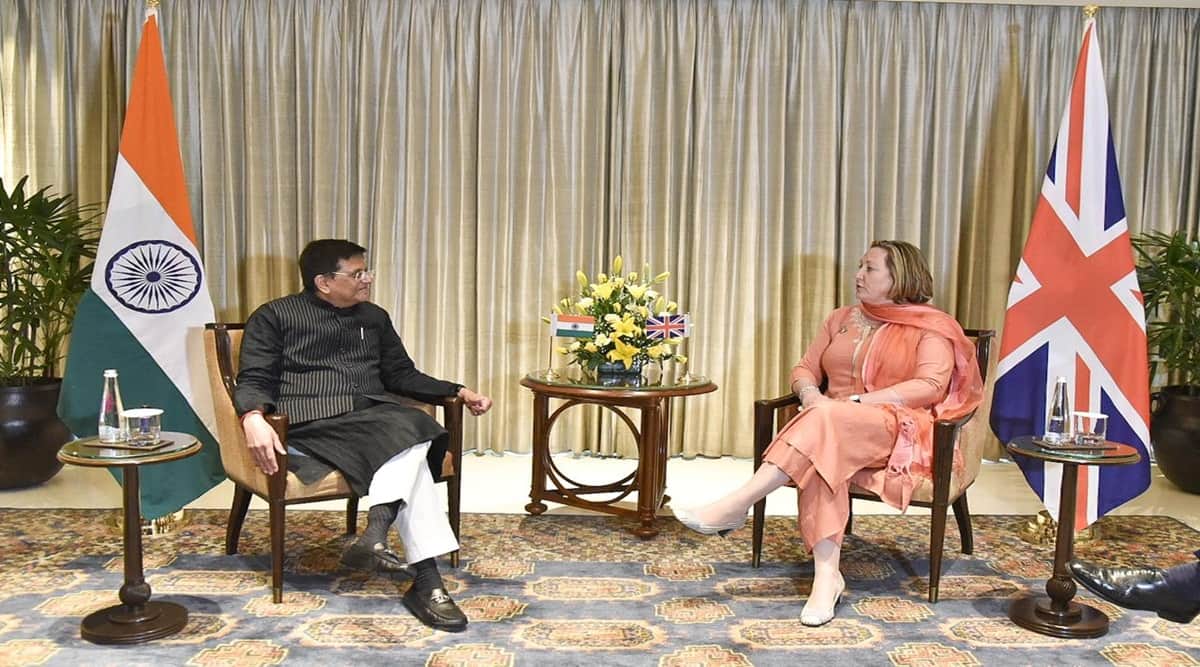 Both sides will hold deliberations over an array of trade opportunities of mutual interest, benefiting India and the UK. (Photo source: Twitter/@PiyushGoyal)

India and the UK on Thursday formally launched negotiations for the proposed free trade agreement (FTA), which is expected to help double bilateral trade by 2030 and boost economic ties between the two countries.

It was launched by Commerce and Industry Minister Piyush Goyal and UK Secretary of State for International Trade Anne-Marie Trevelyan here.

Goyal said that today, the terms of reference of the free trade agreement have been finalised and formally endorsed by both countries.

“We are launching formal negotiations for the free trade agreement for which both teams will be proactively and regularly engaging with each other, deliberating on different aspects of our relationship and fast-tracking the interim agreement or an early harvest agreement, where we hope to capture the low hanging fruits, which will provide opportunities for businesses on both sides and help us substantially, enhancing the volume of trade in goods and services,” he told reporters here.

The first round of negotiations will begin on January 17 and future rounds will take place approximately every five weeks.

Both sides would strive to conclude the negotiations by December 2022.

On a deadline to conclude the talks, Goyal said both the sides have agreed that they would focus initially on areas that are of mutual benefit and where there is less disagreement, for which, “we have set an aggressive timeline of the next few months…and we would be able to easily come up with a substantive agreement in the initial phase itself.

“I think we are committed to concluding the negotiations in about a year’s time,” he added.

He also noted that the endeavour of both the countries is to deliver a comprehensive, balanced, fair and equitable FTA to benefit medium and micro enterprises in India and the UK.

He added that India is also expected to register a quantum jump in the export of marine products through the recognition of 56 marine units of India.

Besides, the Mutual Recognition Agreements (MRAs) on pharma could provide additional market access. There is also great potential for increasing exports in service sectors like IT/ITeS, Nursing, education, healthcare, including AYUSH and audio-visual services. India would also be seeking special arrangements for the movement of its people.

Briefing the media, Trevelyan said: “We aim to double trade between our countries by the end of this decade, supporting jobs, businesses and communities in both our countries”.

She said that the pact would “supercharge” the bilateral economic relations of both countries.

When asked about whether relaxation in visa norms by the UK is a key demand, Goyal said that nothing is necessarily a deal-breaker in this agreement, and there is no need for anybody to worry about issues, which are sensitive to any country.

“Both sides have agreed that sensitive issues are not our priority. We have to capture issues where possibilities are immense, therefore, I can assure all the people of the UK that neither is that a pressing or an overriding demand or for that matter on both sides there is no demand, which is absolutely a deal breaker or absolutely a must,” he said.

In the services sector, the UK is the largest market in Europe for Indian IT services.