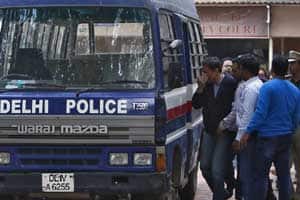 A key accused in the corporate espionage case today claimed that it was a Rs 10,000 crore scam that he was trying to uncover as police said documents seized from corporate executives related to “national security” that can attract Official Secrets Act provisions.

Santanu Saikia, a former journalist, now running an energy consultant running a website, claimed to reporters outside an Crime Branch office that it was a Rs 10,000 crore scam, which he was trying to uncover. “Please quote me,” he said as policemen took him in for interrogation.

Reacting to his claim, Petroleum Minister Dharmendra Pradhan said Saikia was saying such things for covering up his own defence.

“Let him spill out all the information he has. The primary accusation is that somebody stole the papers from the ministry. Police is investigating. Anybody has the right to tell everything to the police,” he said.

Pradhan said police is doing an independent job and everything will be clear after investigation. Law will take its course, whoever they may be, he said when asked about the arrest of executives of private companies.

Producing the five corporate executives arrested yesterday before Chief Metropolitan Magistrate Sanjay Khanagwal, the police said, “National interest was taken for a ride in the case.

“Documents related to national security have also been recovered. This may attract charges under the Official Secrets Act.”

The five–Shailesh Saxena from RIL, Vinay Kumar from Essar, KK Naik from Cairns, Subhash Chandra from Jubilant Energy and Rishi Anand from Reliance ADAG–who were produced in the court in police custody till February 24 for further questioning.

The police told the court that they have to consult the concerned ministries regarding the documents which have been recovered from the possession of the accused and their custodial interrogation was required to confront them with the same.

These five accused were procuring these sensitive documents at the behest of their senior officials, some of whom might be interrogated in the ongoing investigation, police said.

The advocates appearing for these five accused vehemently opposed the police’s plea seeking five days police custody, contending that their clients have been illegally detained since February 18 and 19.

The defence counsel also contended that there was nothing to be recovered from their clients and the police have not told the court regarding the specific allegations against these accused.

With the arrest of these five accused, the total number of arrests in the case rose to 12. Seven others were produced in the court yesterday out of whom four were sent to police custody till February 23 and three were remanded to judicial custody for two weeks.

Police sources said that Subhash Chandra, a senior executive with Jubilant Energy, who was arrested along with four other top officials of energy companies yesterday, was taken to Jain’s office in the morning.

After searching Jain’s office, the police team took him to the Noida office of Jubilant Energy. His office and some other rooms were searched by the police to recover stolen documents.

Office of another petroleum company whose executive was also one of them arrested was also raided by the police. Laptop and computers of the arrested officials have been seized by investigators which would be sent for forensic analysis.

Asked about the issue, Delhi Police Commissioner B S Bassi said, “We have searched places which were necessary for the course of investigation. We may further raid places as our aim is to reach the bottom of the whole thing.”

The police chief also said that investigation is on in the case and it will end only when a charge sheet will be filed.

“We need to know since how long this has been going on and who all benefited from it,” said a senior official.

According to police, all these company executives allegedly received stolen documents which have been recovered by police teams during raids from their establishments.

They have been booked under IPC sections 120 B (criminal conspiracy) and 411 (dishonestly receiving stolen property).

The case FIR, produced in a local court yesterday said an input on the National Gas Grid for the Finance Minister’s Budget speech of 2015-16 is among the various “secret” documents recovered from the accused.

The office of Reliance ADAG group at a premier five-star hotel here was also raided today by police in this connection.

“We are basically looking for the stolen documents from the establishments linked to the 12 people we have arrested so far. Searches are being conducted at various places in Delhi and NCR,” said a senior police official associated with the probe.

The raids have been confined to this region and not being carried out “across the country” as was speculated, he added.

Sources, meanwhile, said that police had also stumbled upon another module operated separately from the those arrested so far and their ‘area of operation’ was another plum ministry.

They added that a junior level officer and some more corporate executives are under scanner in this connection and arrests are expected by Monday.