The Indian economy recovered well from the down quarters in fiscal 2020-21, needs a fiscal stimulus to rebound faster in 2021-22 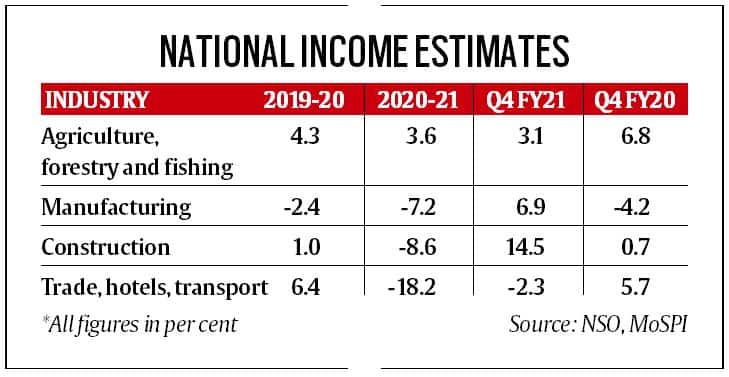 "Globalisation has tripled Indian GDP in a generation, an amazing accomplishment, ..but the workers of India have been left out," Maskin, a professor of Economics and Mathematics at Harvard University, said.

In the wake of the pandemic, most analysts opined that the economy would contract by 8- 10% in real terms because of the total lockdown and partial lockdowns in Q1 and Q2 FY21, respectively. However, as growth picked up in Q2, some revised it upwards to a decline of 7.5%. The provisional estimates show a contraction of 7.3%—from Rs 145.7 lakh crore real GDP in FY20 to Rs 135.1 lakh crore in FY21. In nominal terms, GDP declined from Rs 203.5 lakh crore in FY20 to Rs 197.5 lakh crore in FY21—a contraction of 3%. Per capita nominal GDP plunged by 4%, from Rs 1.52 lakh in FY20 to Rs 1.46 lakh in FY21. Analysing the budget in nominal terms gives a better indication of what transpired since it reflects the prices people experience and transact with today.

A close look at the break-down of nominal GDP high- lights changes in three essential components:

Both private consumption and capital investment declined due to the shutdown in Q1 and Q2 FY21.

A closer look at the nominal GVA composition reveals which sectors were most affected by the lockdown in FY21.  Agriculture is the only sector that recorded positive growth of 6.5%, increasing from Rs 33.9 lakh crore in FY20 to Rs 36.2 lakh crore in FY21. This is a direct result of keeping the rural economy open during the first wave, enabling farmers to harvest the record high rabi crop, sow and harvest the kharif crop, and benefit from various schemes, including PM-KISAN.

Another significant services sub-sector is Financial, Real Estate and Professional Services that grew marginally by 1%—important to note because, usually, this sub-sector grows at 7%+ and the difference of 6%+ growth is a significant loss. Lastly, net taxes declined by only 3%, indicating the taxpaying sector was not unduly affected by the pandemic and lockdown.

Analysis of quarterly nominal GDP growth shows the economy was gaining traction after the lockdown in Q1 and partially in Q2 in FY20. The accompanying graphic shows quarterly GDP over the last three years. Q1FY20 GDP grew at 9.6% over Q1FY19, the highest growth percentage- change compared to the other three quarters—indicating that Q1FY21 growth would have also accelerated had, but for the pandemic and the national shutdown. Q1FY21, instead, recorded a decline of 22.3% over Q1FY20.

The decline slowed down significantly in Q2, at -4.4% compared to Q2FY20, as the lockdowns eased and businesses and manufacturing came back online. As a result, Q3FY21 went into full swing, recording growth of 5.2% over Q3FY20—considerably close to the 6.5% Q3FY20 recorded over Q3FY19. The momentum enabled Q4FY21 to catch up to 8.7% over Q4FY20—same as the percentage-change of Q4FY20 over Q4FY19. The year-end momentum is corroborated by the all-time high GST collections of  Rs 1.41 lakh crore in April 2021 for sales in March 2021. Similarly, the corporate sector, which saw a decline in revenues in FY21 Q1, recovered to record all-time-high profits in Q2, yet again in Q3, beating this in Q4.

The Indian economy was coming back on track towards H2 FY21, and robust estimates were made for economic growth in FY22. Real GDP growth estimates were in the range of 10-12.5%, translating to 14-16.5% in nominal terms to include inflation. However, due to the second wave and local lockdowns, Q1FY22 will again record a down quarter, and Q2 will see some recovery with gradual unlocking. Growth estimates have now been marked down to 7.5- 10%. The quarterly GDP estimates,sectoralGVAbreakdown and trends in consumption and capital investment show the major levers of the economy.

High growth requirement of FY22, with substantial job creation to counteract the large- scale employment-loss caused by the pandemic, can be met by focusing on these. However, a great deal rests on urgent stimulus from the government to push consumption, manufacturing, construction, and job creation. A monetary stimulus will no longer be effective; a fiscal package is the only way to ensure FY22 records healthy growth.

(Pai is chairman, Aarin Capital, & Holla is Technology Fellow, C-CAMP. The views expressed are his own and not necessarily that of Financial Express Online)