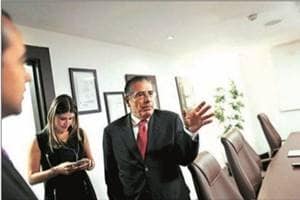 A 10-member consortium, which bid unsuccessfully for the Pune IPL team in March 2010, included an offshore company which, according to Mossack Fonseca documents investigated by The Indian Express, was acquired for unknown beneficiaries in December 2009.

“The consortium,” according to the Memorandum of Understanding (MoU) signed by 10 members in March 2010, “have formed a company P-Vision Sports Private Limited in which the parties will invest and own shares in the company for the purpose of operating the IPL franchise on successfully winning the bid”.

The MoU, part of the Mossack Fonseca records, earmarked 15 per cent share in the consortium for Obdurate Limited, a faceless company in the British Virgin Islands. It was shut down soon after the IPL franchise bidding.

According to the MoU, the largest stake of 33 per cent in the consortium was held by the Chordia family who control the Pune-based realty major Panchshil Group through Atul Chordia (9%), his wife Varsha Chordia (9%) and the family-run Courtyard Properties Private Limited (15%).

Clause 8 of the MoU stated: “Obdurate shall be entitled to establish a wholly owned subsidiary to stand in its place for the purpose of investing in and holding shares of the company (P-Vision) and entering into the shareholders’ agreement.”

The MoU effectively allowed Obdurate Ltd and its undeclared owner to remain invisible in case the bidding was successful.

In 2010, then IPL commissioner Lalit Modi was accused of adding two clauses in the bid for two new franchises — that a bidder must have “a net worth of US $1 billion” and “give a bank guarantee of Rs 460 crore” — to filter out small bidders. Finally, the $4-billion Videocon Group — leading the 10-member consortium — and $5-billion Adani Group were the only bidders for the Pune and Ahmedabad franchises respectively.

Following an outcry, the IPL governing council cancelled the March 7 round of auction, dropped the two clauses and invited fresh bids. Subsequently, the P-Vision Sports Pvt Ltd consortium and the Adani Group lost out to Sahara Adventure Sports (for Pune) and Rendezvous Sports World Limited (for Kochi) in the bidding on March 21.

Registrar of Companies (RoC) records show that P-Vision Sports Pvt Ltd was incorporated as P-Vision Integrated Townships Pvt Ltd, a realty company, in February 2008. Atul and Sagar Chordia, its first directors, held 5,000 shares each at Rs 10 per share. The company was rechristened on February 22, 2010 — barely two weeks before the March 7 IPL bidding — and its purpose was changed from real estate development to promotion of sports.

As the company set out to distribute stake and become a 10-member consortium to bid for an IPL franchise, Venugopal Dhoot and Manoj Jain were appointed directors on February 27, 2010 and Sagar Chordia left the board, RoC records show. After the bid failed in March, Jain and Dhoot resigned as directors in April 2010, and Sagar Chordia returned.

According to Mossack Fonseca records, Obdurate Ltd was incorporated in October 2009 as a shelf company and acquired on December 23 that year by CM Management Suisse SA (CM SKYE), a Swiss financial service provider. Requested to provide directors and shareholders for Obdurate Ltd, Mossack Fonseca appointed in-house Seychelles companies Roselle Ltd and Gudson Ltd as directors, and issued all 50,000 shares to Puffin Agencies Limited of Gibraltar.

Mossack Fonseca records show that on March 4, 2010, it sent the IPL bidding papers, signed by director Roselle Ltd on behalf of Obdurate Ltd, to Charles Mia, a London law firm. Less than two months later, on April 27, following the unsuccessful bidding, CM SKYE asked Mossack Fonseca to shut down the company which “has no assets or liabilities and is therefore no longer required”.

In the few months it existed, Obdurate Ltd or the firms handling the affairs of the company never disclosed any information about the beneficiary owner to Mossack Fonseca. On receiving CM SKYE’s urgent request for signed bidding documents on March 3, Mossack Fonseca’s London office on March 5 refused to comply until details of the company’s beneficiary owner were provided.

But Mossack Fonseca’s Isle of Man office, which too had received the CM SKYE request, had forwarded it to its BVI office where its legal cell had already sent the required signed documents on March 4.

Subsequently, three reminders from Mossack Fonseca’s London office to CM SKYE on March 15 and 19, and April 1, seeking details of the ultimate beneficiary owner of Obdurate Ltd elicited no response. The company was deactivated on May 12, and struck off on April 30, 2011.

The P-Vision consortium was disbanded after the failed bid in March 2010. The company, however, is active and retains sports promotion as its objective.

In an email, Venugopal Dhoot of Videocon said: “I am concerned only with Videocon & its 25% stake in P-Vision Sports Pvt Ltd. There were other members, whose details I am not privy to. So I do not know Obdurate Ltd (BVI) and any offering of sweat equity thereof. It (the MoU) was only desired share holding pattern, which we suggested to be post winning of franchise/bid. I am not concerned with MoU except our stake of 25%, as it was drafted by the lawyers at the instance of Mr Atul Chordia.”

In an email sent on March 28, Atul Chordia said the Panchshil Group had always held 100% of the equity shares of P-Vision, and that Obdurate Ltd never held any equity shares in the company. Told that the shareholding agreement in the MoU was to come into effect on winning the 2010 bid, he did not respond.

Responding to an email for comments from Kareena and Karisma Kapoor, Kareena Kapoor’s office said: “Kareena is not in town. We are not able to get in touch with them.”

Manoj Jain was not available for comment. Saif Ali Khan did not respond to messages and emails.