Initial outcomes of efforts to modernise Indian Railways are “overwhelming” but they are just a “trailer” and its improvised version would be seen after four to five years, Railway Minister Suresh Prabhu said here today. 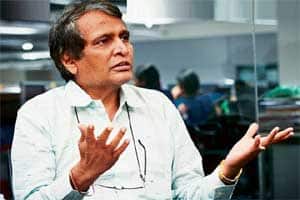 Initial outcomes of efforts to modernise Indian Railways are “overwhelming” but they are just a “trailer” and its improvised version would be seen after four to five years, Railway Minister Suresh Prabhu said here today.

“We have prioritised railways and have been trying hard to fulfil the expectations of passengers by modernising it and initial outcomes (of our efforts) are overwhelming,” he said on the centenary celebrations of Central Railway’s Matunga Workshop.

“But let me tell you that this is only the trailer of modernisation. You will see the full results and improvised version of Indian Railways after four to five years,” Suresh Prabhu said.

The minister also laid foundation stone for a foot over bridge (FOB) at Currey Road station on central line.

“In the last many decades, railways did not get its share of care. That is why it is falling short of meeting passengers’ expectations. But forget all that. We have taken a numbers of initiatives to improve it because we understand better railway means better India,” he said.

“This is why our Prime Minister has prioritised railways (which is) on the top of his agenda and we are vehemently pushing all the big and small projects to revive it,” Prabhu said.

Appreciating China for “taking forward” railways in their country, Prabhu said India “cannot compete with them” but has a “lot to learn” from the neighbour.

Speaking to mediapersons, Prabhu said, “We need money to push our infrastructural projects forward and fortunately we have succeeded in investing huge amount through extra budgetary resources …. and we believe that we would overcome all the hurdles and move forward on the path of progress.”

The railways has been facing extra monetary burden owing to implementation of the Sixth Pay Commission as well as subdued earnings through freight transportation because growth of this core sector saw a decline, the minister said.

“Despite all the odds, we provisioned Rs 10,000 crore by cutting expenditure and neutralising revenue deficit. Also, I am going talk with the state governments,” he added.