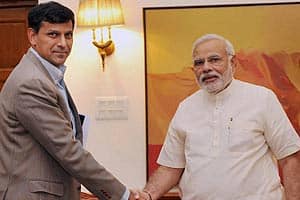 In a veiled criticism of RBI Governor Raghuram Rajan’s comments on Prime Minister Narendra Modi’s ‘Make in India’ campaign, top government official today said the country can become a manufacturing hub only if exports grow and not just by producing for domestic consumption.

“All of us must be absolutely clear that India can become a great manufacturing nation if exports grow and they must grow rapidly. Exports (will) grow if all of us realise the significance and importance of exports,” Secretary, Department of Industrial Policy and Promotion (DIPP), Amitabh Kant said.

“You never make goods only for domestic market. No manufacturer across the world does only for the domestic market. You do it initially but then you expand, you grow and penetrate global markets and thats what a true businessmen is supposed to do,” he added.
India’s share is very low in the global trade, Kant said at a function organised by industry body Ficci that .

“…your share is so low, what we are talking about. 1.7 per cent and we are saying do not export. This is the time you must penetrate global markets with much greater vigour and energy,” he added.

On December 12, Rajan sounded a word of caution about the new government’s ‘Make in India’ campaign that assumes an export-led growth path of China and said instead it should be ‘Make for India’ that will produce for the internal market.

However, Commerce Secretary Rajeev Kher said that today the global economic situation is not good which “can spur your manufacturing ambition the way you have projected. So today you have to be driven by your domestic impetus”.

He said that If India want to play a big role in international market, the industry needs to enhance its competitiveness.

“Today you are competitive vis-a-vis Asian economies in only 14 per cent of the product areas and that is what ‘Make in India’ is trying to do – make competitive, which means infrastructure, labour productivity and skills.

“So I think we need to understand the perspective in which all this is happening rather than getting into this jargon of export-led or…,” Kher added.

Further, Kant said that ‘Make in India’ is extremely inclusive and it is ‘Make for India’ and when one make he or she do not make only for India.

“You make also for exports”.

Citing example of auto major Hyundai Motor India, the DIPP secretary said the company exports 44 per cent of its production to 123 countries.

The company has manufacturing unit in Chennai.

“India’s share in global market is just 1.7 per cent. It’s very important that India become competitive and gets larger share in export market. It is very difficult for India to drive its manufacturing till export do not grow.

“Lets get that clear. Export must grow at high rates. Push for exports in a much bigger way so that manufacturing in Indian can grow. To my mind, if your share in global market is so low, there is no need to express export pessimism at all’,” he added.