NPPA slashes prices of cancer, diabetes, BP drugs by around 25%; rates of 56 drugs to come down

Prices of 56 important medicines used in treatment of cancer, diabetes, bacterial infections and blood pressure have been capped by the government. 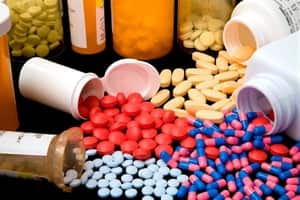 These patents are valid through 2026 and 2032, respectively, it added. (Reuters)

Prices of 56 important medicines used in treatment of cancer, diabetes, bacterial infections and blood pressure have been capped by the government thereby reducing the cost by an average of around 25 per cent.

Drug price regulator National Pharmaceutical Pricing Authority (NPPA), however, has also increased prices of some of the smaller volume packs of commonly used intravenous fluid such as glucose and sodium chloride injections.

“The prices of drugs have been reduced on an average of 25 per cent. In some cases the reduction is 10 to 15 per cent while for others it is up to 45 to 50 per cent also,” NPPA Chairman Bhupendra Singh told PTI.

He further said out of these, for the 31 scheduled formulations packs of IV Fluids, NPPA has increased prices in case of small volume packs while reducing it for large volume packs.

NPPA, in its notifications for the fixed/revised ceiling prices said: “The manufacturers not complying with the ceiling price and notes specified herein-above shall be liable to deposit the overcharged amount along with interest thereon…”

The capping of the prices of 56 scheduled formulations of Schedule-I is being carried out under Drugs (Price Control) Amendment Order, 2016, and retail prices of eight formulations under DPCO, 2013.

The government fixes the prices of essential drugs based on the simple average of all medicines in a particular therapeutic segment, having sales of more than 1 per cent.

Companies are allowed to hike prices of such drugs by up to 10 per cent in a year.

Set up in 1997, NPPA has been entrusted with the task of fixation/revision of prices of pharma products, enforcement of provisions of the Drugs (Prices Control) Order and monitoring of prices of controlled and decontrolled drugs.