No link between wages and productivity: Bhargava

Worker must understand a company must have certain minimum margins if it is to generate minimum resources, not only to invest and grow, but also to pay them more 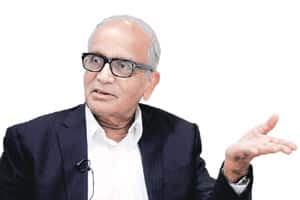 Worker must understand a company must have certain minimum margins if it is to generate minimum resources, not only to invest and grow, but also to pay them more

At a time when the government is amending the country’s labour laws, RC Bhargava said on Tuesday that there was no link between wages and productivity, which is what had led to an increase in contract labour. Speaking at the Indian Express Group’s Idea Exchange programme, the Maruti Suzuki chairman said India would slowly become uncompetitive in the manufacturing sector if this was not addressed. “Today, by and large, there is no link between wages and productivity. Tell me where in which company they link wages to productivity,” Bhargava observed.

Bhargava was also critical of the use of contract labour, calling it an “irritant”. Instead, he advocated that companies be allowed to hire temporary workers without any compulsion to make them permanent if they worked for a specified period. “The category of permanent and temporary workers should be different with all major benefits accruing to both albeit with a marginal difference in salary,” he said, adding that “in times of downturn, when the temporary workers are laid off, they should be paid a subsistence allowance so that the company easily absorbs them once the rough times are over”.

The auto sector veteran, who is no stranger to the government with his roots in the IAS, pointed out that the lack of a link between wages and productivity was what had caused the demise of some public sector undertakings and unless checked it would be detrimental to the private sector. Bhargava suggested workers’ demands must be linked with the performance of the company but the management too should not reward itself at the cost of investing in company’s growth.

“Workers must understand that a company must grow, remain competitive and generate minimum margins, not only to invest and grow, also to pay them more,” Bhargava said.

He added that the absence of the link between wages and productivity was forcing companies to opt for contract workers. However, Maruti by and large did not suffer from this problem. “At the Gurgaon plant, for instance, productivity has kept pace and the total cost of employees is about 3% of sales. That is only possible because of improving productivity and cost reduction,” he said.

Bhargava believes a large number of industrial strikes are related to contract workers and their problems and that this needs to change with a provision in the law for temporary workers. “My idea of a temporary employee is that you recruit them in the same manner as you would a regular employee. If there is a downturn in the industry the junior-most guys can be laid off and when demand picks up those same people can be brought back,” he observed. The number of temporary workers, he said, could be 30-35% of the total work force. “When the workers are laid off, lots of them go and find jobs elsewhere but companies are very happy to take them back as they have been trained,” he added. Bhargava said that the present system where companies were hiring through contractors was defective, and that they should recruit directly. “Till I was the managing director of Maruti till 1997, we did not hire through contractors. Later, since other Japanese JV companies like Hero Honda were hiring through contractors, Suzuki saw some advantages in the practice. However, they did not see the disadvantages,” he added.