No FDI in sectors that can put Indian jobs at peril: Nirmala Sitharaman

Government will not open up those sectors to FDI where it can put at ‘peril’ jobs of self-employed Indians, Commerce Minister Nirmala Sitharaman said today, insisting its policies are not ‘ambivalent’. 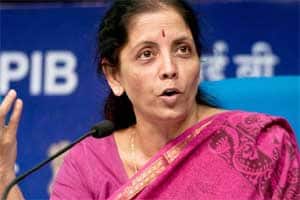 Government will not open up those sectors to FDI where it can put at ‘peril’ jobs of self-employed Indians, Commerce Minister Nirmala Sitharaman said today, insisting its policies are not ‘ambivalent’.

Although the government has eased norms for FDI in many sectors, she said: “For us to open up and then to put at peril jobs of self-employed individuals will also not be good. So we are taking a calibrated position as regards FDI right to that extent.”

“Unless we are sure that their interests and their self-created jobs are not at peril, to rush into it will not be a good thing. So we are certainly going in a calibrated fashion to ensure that investments are brought in where they are required,” said the minister.

She, however, did not specify which sectors will be restricted to FDI.

The BJP-led NDA government has already made clear its stand against FDI in multi-brand retail although the previous UPA government permitted up to 51 per cent FDI in the sector.

When pointed out that while the government had recently allowed 100 per cent FDI in processed food retailing but put a condition that they must be manufactured in India, which run contrary, she said: “India is not ambivalent. We are clear that FDI in sectors which will be required because of technology or because of the investments which will be required are welcome.”

Asserting that the calibrated position adopted by the Government was “necessary to protect national interest,” Sitharaman said the government “certainly cannot open up sectors (to FDI) in which people all over the country have invested and carried it on without the government’s help”.

The government has also allowed 100 per cent FDI through automatic route in market place model of e-commerce, but it has been strongly opposed by traders body CAIT which said that it would give back door entry to global players in multi-brand retail trading and impact MSMEs.

Clarifying the government’s stand, Sitharaman said: “There is a misunderstanding … We have not opened it (e-commerce) for multi-brand retail or for e-commerce which deals from business to individual buyers. FDI is permitted only for marketplace model. So if there is anger I think it should not be because we have not opened it up for business to single buyer”.