Will also work towards rationalising the number of state-level and Centrally-funded schemes. 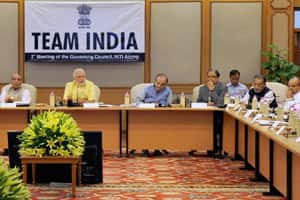 “An average state does not require more than 20 departments to run its administration. But most states have a much larger structure as they feel that the 15 per cent ceiling should be met,” said an official familiar with the development.

The size of a government’s council of ministers depends on the Constitution (91st Amendment) Act, 2003 that limits the size of all ministries in India to 15 per cent of the total number of members in the Lok Sabha or state assembly.

According to the plan being worked out by the NITI Aayog, each state should ideally have about 20 departments. The Aayog would work with states to this end, starting with Kerala, Rajasthan, Jharkhand and Uttar Pradesh.

Meanwhile, as part of the NIYATAM initiative, the NITI Aayog will also work with states to rationalise the number of schemes at both the state level as well as those that are centrally funded. “With the recommendations of the Fourteenth Finance Commission giving more revenue share to states, this will help them formulate their Budgets next fiscal,” said the official.

Additionally, the agency is also planning to monitor the improvement in states’ development by collecting data on a set of indicators such as education, health, roads, water, electricity, mobile penetration. “The data will be used to monitor each state’s individually and not for inter-state comparisons,” stressed the official.

The sources of data collection are likely to be finalised by the month end and would be started in the states of Kerala, Rajasthan and Jharkhand at first.

The Aayog also proposes to work on district planning and building by examining the baseline indicators and strengths and weaknesses of each district. “The idea is to figure out what needs to be done in that district in terms of public and private participation,” said the official, adding that all districts in the country would be eventually covered.

The Aayog is also planning to establish a results framework document at the block level. But the proposal is only at an initial stage and is being worked out by the Cabinet Secretariat.

As part of its move to improve efficiency in government functioning, the Aayog is also planning to look at revamp of laws. “This can be done in four ways — by repealing old laws, rationalisation and consolidating the ones that remain and introducing Bills where there is a vacuum and examining the amount of state intervention required,” explained the official, adding that this has already started in Rajasthan where the repealing work is almost over.