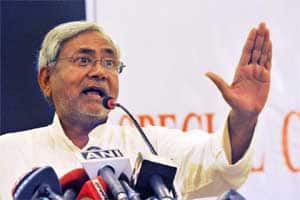 Bihar Chief Minister Nitish Kumar today justified scrapping 34 populist decisions taken by his predecessor Jitan Ram Manjhi days before he quit but it has triggered protests from some leaders of ally RJD and also by Bihar Police whose one lakh personnel will not celebrate Holi.

Nitish said Manjhi Cabinet’s announcements were basically “non-decisions” as no laid down procedure was followed.

“The decision (to annul) was taken on the basis of legal opinion which advised so as no laid down procedures were followed,” Kumar told reporters justifying decision of his Cabinet yesterday to annul approval given by Manjhi Cabinet for 34 items during its meetings on February 10, 18 and 19.

“In a way these were ‘non-decisions’ as it did not follow set rules,” he said. Manjhi resigned on February 20.

Kumar said there was no cabinet note for these approvals and it violated established rule of executive business.

“In a way these were verbal decisions which was given the shape of cabinet decision,” he said, adding even they (the previous government of Manjhi) could not have implemented these “irregular” decisions.

“It could have invited scrutiny at some stage,” he said.

“Had we gone ahead on these decisions we would have been party to the irregularities adopted in taking such decisions,” he said to drive home his point.

With even some leaders of supporting RJD seeking review of his Cabinet’s decisions, Kumar said the departments have been given freedom to review merit of these proposals and if they find merit in them after following due procedure it could be brought before the Cabinet again.

“My USP is ‘sushasan’ (good governance) and by vetting such irregular decisions I could have compromised with sushasan which is not possible…even we in Cabinet are not free to take any decisions without following procedures.”

The decisions annulled included increasing fund for legislators from Rs 2 crore to Rs 3 crore annually under CM Development schemes from next fiscal, setting up a committee to study reservation for poor among forward castes, providing 13 months salaries to policemen instead of 12 months and reservation for backward, most backward and women applicants in contract of Road Construction department.

Around one lakh Bihar Police personnel, from the rank of constables to inspectors, have decided not to celebrate the festival of Holi tomorrow to protest against the decision to scrap the additional one month salary every year approved for them by the Manjhi government, Bihar Police Association (BPA) President Mrityunjay Kumar Singh told PTI.

The personnel comprise 80,000 constables and around 19,000 sub-inspectors and inspectors.

RJD spokesman Bhagwan Singh Kushwaha said, “We demand that Chief Minister Nitish Kumar should reconsider his decision. It is not necessary to accept all the resolutions of Manjhi, but better pay to policemen and home guards is a welfare move.”