Trying to make things quicker and hassle-free, the power ministry is going the distance by approaching people with a simple half-page application for a new connection… 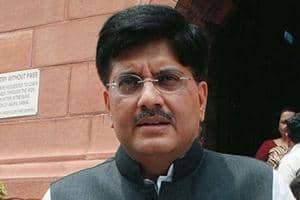 Goyal sought the details about the absent ministers, the Secretaries' attendance from all the states, and reasons for their not being here.(PTI)

Trying to make things quicker and hassle-free, the power ministry is going the distance by approaching people with a simple half-page application for a new connection, rather than waiting for them to apply, Minister Piyush Goyal today said.

The move is part of the government’s broader efforts to realise its objective of power for all by 2019.

“I am actually telling my officers that they have to go to peoples’ homes, make a simple half-page format, (ask them to) just give Aadhaar number, e-mail, address and mobile number, and sign it, saying I am desirous of a power connection and follow all rules and terms. That is it,” Goyal said while speaking at an industry event.

Making it amply clear that timelines and missions are sacrosanct for this government, the minister said “if we want to achieve results, it has be bang on time”.

The government has set a target of providing power to all by 2019. According to the government’s earlier estimates last year, as many as 28 crore people in the country went without electricity.

Piyush Goyal asserted that the government is working in a mission mode in this regard.

The minister also spoke about full operationalisation of 4×40 mw Teesta Low Dam Hydro Electric Project (HEP) stage-IV in West Bengal by December this year. Two units of 40 mw each have already been commissioned.