Net neutrality report to be out soon, waiting for TRAI: Ravi Shankar Prasad

Telecom Minister Ravi Shankar Prasad said the government will soon come out with its report on the controversial issue of net neutrality and the telecom department is waiting for the report from sectoral regulator TRAI. 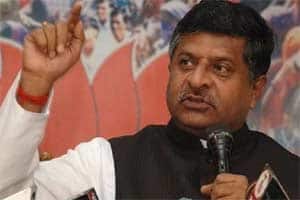 Telecom Minister Ravi Shankar Prasad today said the government will soon come out with its report on the controversial issue of net neutrality and the telecom department is waiting for the report from sectoral regulator TRAI.

“Report of net neutrality will be out very soon but we are waiting for TRAI report on the issue,” Telecom Minister Ravi Shankar Prasad told reporters here.

The telecom department, which had set up a panel to look into the net neutrality issue, submitted its report to Prasad earlier this month.

Net neutrality implies equal treatment be accorded to all internet traffic and no priority should be given to any person or entity or company based on payment, which is seen as discriminatory.

Apart from the six-member committee appointed in January this year by DoT, Telecom Regulatory Authority of India (TRAI) had also invited stakeholders comments on issues such as net neutrality and regulation of OTT services like WhatsApp and Skype.

The regulatory received over 10 lakh comments.

In the meantime tenur of the then TRAI Chairman Rahul Khullar ended and the new head is yet to be appointed.

“Announcement (of new TRAI Chairman) will be made very soon,” Prasad said.

Net Neutrality, a widely debated issue globally, has in the past few months caught India’s attention with politicians, corporate leaders and film stars taking to social media sites such as Twitter and Facebook to debate on the issue.

The issue gained national attention after internet activists and experts flagged telecom giant Bharti Airtel’s ‘Airtel Zero’ platform to be in violation of the principle.

Airtel Zero is an open marketing platform that allows customers to access a variety of mobile applications for free, with the data charges being paid by startups and large firms.

Also over the last few months, operators like Reliance Communications and Uninor have tied up with players like Facebook, WhatsApp and Wikipedia to offer free usage to consumers.