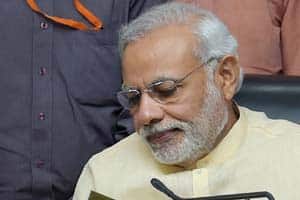 Benchmark BSE index rebounded after falling to its lowest since early June on Tuesday and was close to giving up its gains made since Narendra Modi was sworn in as prime minister, as global markets remained under pressure. (PTI)

Tacitly admitting that there’s no likelihood of the Rajya Sabha approving the Bill to amend the Land Acquisition Act, 2013, in the immediate future, the NDA government is prodding states, especially those ruled by political dispensations friendly to it, to implement the key proposals in the Bill.

After Wednesdays’ meeting of the governing council of the NITI Aayog — chaired by Prime Minister Narendra Modi, attended by 16 chief ministers and “boycotted” by nine Congress chief ministers — finance minister Arun Jaitley said states can’t “indefinitely wait” for the Bill’s passage, adding that many of them wanted to use the flexibility afforded by the Bill to pass their own laws and make land acquisition for strategic and development activities easier.

The Bill, seeking to unburden land acquisition for developmental and strategic projects from some cumbersome clauses of the UPA government’s 2013 Act and extend its benefits like substantially higher compensations to the affected families to acquisition under 13 more central Acts, was generally lauded by industry.

The Bill was passed by the Lok Sabha on March 10 but was blocked in the Upper House where the ruling coalition lacks majority. An ordinance that the Bill was meant to replace was first issued on December 31, 2014, and has since been re-promulgated twice — on April 3 with some changes to pacify political opposition and again, on May 30.

“An overwhelming section (of chief ministers) said either the Centre must build a consensus and pass the amendments to the law quickly or give the flexibility to states to make their own laws,” Jaitley said.

The minister’s remarks underline the sticky political stand-off over the Bill that seeks to exempt land acquisition for a broad range of projects — public and public-private ones in the infrastructure sector — from the requirements of the consent of landowners and social impact assessment (SIA), prescribed under the 2013 Act.

As “land” is in the Constitution’s concurrent list, both Parliament and state legislatures have the power to make laws on it. However, if provisions in a state law conflict with the central law, then the state law cannot prevail unless it receives Presidential assent.

Jaitley explained that Section 10A of the ordinance empowered states to exempt the five categories of projects — defence, infrastructure, rural infrastructure including electrification, affordable housing, and industrial corridors — from the consent and SIA clauses in the Act passed by the UPA government. He added that Modi had assured the chief ministers who sought flexibility in designing their laws on land acquisition that their sentiments would be borne in mind. The prime minister, however, asserted that development could not be impeded by the stringent provisions in the UPA’s law, after the enactment of which land acquisition for industrial purposes has slowed down in most states.

The government, which has a heavy legislative agenda including the GST Constitutional Bill for the monsoon session of Parliament beginning on July 21, obviously wants to avoid a confrontation with the Opposition on the land Bill, support to which is inadequate in the Upper House.

As per the Right To Fair Compensation and Transparency in Land Acquisition, Rehabilitation and Resettlement (LARR) Act, 2013, (which came into force on September 26, 2013, and was subsequently superseded by the ordinance), consent of 80% the project-affected people was required for private projects and 70% of landowners for public-private partnership projects. The NDA’s Bill seeks to change this to state that when the government acquires land for five categories of strategic and developmental projects projects, the consent won’t be a mandatory.

With the lack of consensus in the Rajya Sabha, the NDA’s Bill was referred to a joint committee of both Houses on May 13.

The UPA’s Act was ostensibly meant to remove the negatives of the Land Acquisition Act, 1894, which practically allowed governments unchecked powers to acquire land for (undefined) “public purpose”. It sought to give the landowners fair compensation but added the difficult and arguably impractical provisions of consent and SIA.