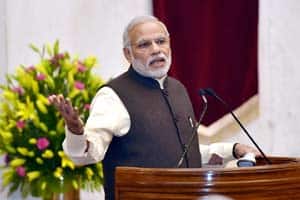 We must be pragmatic…I am not to eliminate subsidy but to rationalise and target them,” Prime Minister Modi said while delivering the key note address at the Global Business Summit

He said India’s GDP has clocked an impressive 7.4 per cent growth and the World Bank and International Monetary Fund (IMF) and other international agencies have projected this growth momentum to continue.

Addressing CEOs Forum here along with Russian President Vladimir Putin, Modi said his government is committed to a fair taxation regime and the efforts towards improving the ease of doing business would go on.

He said various indices of the economy, including Current Account Deficit (CAD) and flow of FDI, have been impressive and the aim of his government was to make India a global manufacturing hub.

“We are working towards ensuring best possible infrastructure in India… because of efforts of our government the economy has witnessed sustained growth,” he said, adding “we are committed to ensure a stable and transparent taxation regime.”

Modi said Russia can take advantage of ‘Make in India’ initiative which would help the economies of both the countries.

Russia could play a key role in India’s diamond trade sector, he added.

Speaking on the occasion, Putin said that Indian companies could have better involvement in Russia’s oil and gas sector.

The efforts, he added, should be to remove hurdles to ensure better flow of investments from Indian companies in Russia.

Narendra Modi said his government’s endeavour would be to ensure “liberal conditions” for Indian investors.

Appreciating the interest shown by Russian businessmen in Delhi-Mumbai industrial corridor, Modi said they should also look at Chennai-Bangaluru and Amritsar-Kolkata corridors.

The good news, he added, was that the trade and business relations have become vibrant and a number of Russian and Indian companies are working together.

Russia has and will always be a vital and long-term partner, not only in energy and mineral resources, but also in cutting edge technologies, Modi said, adding that the nature has destined us to work together.

From hydrocarbons, the cooperation is now moving to the hardest form of carbon – diamonds, the PM said.