PM Modi terms himself ‘UP wala’, says hope has replaced hopelessness under NDA 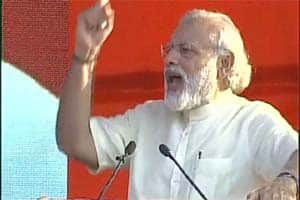 Prime Minister Narendra Modi today asserted that a mood of development and hope pervaded the country replacing hopelessness that prevailed under the UPA rule as he pitched his government as one dedicated to the poor and farmers which prevented the “loot” of public money.

Addressing the first of his four public rallies here in Uttar Pradesh, which will have assembly polls next year, to mark the second anniversary of his government, Narendra Modi reached out to the electorate, calling himself a “UP wala” who cared for the farmers.

He said his government had taken a series of measures to help repay the dues of sugarcane farmers, a politically important constituency in the region, while other governments were not concerned about them.

Recalling that in his address after he was elected the leader of the BJP-led NDA following the Lok Sabha win he had promised his government would be dedicated to the poor, Modi said every decison he had taken ever since was in that direction.

“If you look at my work of two years, you will see one decision after the other was taken to empower the poor to fight poverty, to strengthen the poor against poverty so that they could defeat it. No poor man wants to bequeath poverty to his children. I have always tried to work for the common man,” he said.

Development, he said, was the solution to all problems and all other talk was meant to win elections and cater to vote bank politics.

With the NDA dispensation facing criticism over alleged intolerance, Modi said his government’s “conscience was clear” and it wanted to develop all sections of society.

Without naming the UPA government, he attacked it over alleged corruption and flagged his government’s “honest” credentials.

“How much money was looted. Now I am in government and I am shocked over it as whether people are given chair to loot public money. I had pledged to stop this.

“I want to ask you have you ever heard any news that the Modi government had pocketed money? Have even our rivals levelled such allegations? Two years ago nobody had the courage to give their report card to lakhs of people like this,” he said.

That is why, Modi said, his government was observing ‘vikas parv’ (festival of development) and all his ministers would travel across the country to give to the people an account of their work.

Asserting that India was growing at the fastest rate, Modi said only two years ago many thought the country had “sunk”.

Speaking about the ongoing electrification of over 18000 villages, Modi said media highlights any gap in the claims made by his government and added he welcomed criticism. Over 7000 villages have received power and UP had the largest share, he said.

Attacking previous governments for making LPG connections a thing for the rich, Modi said his government had distributed it among the 3 crore poor families and 5 crore more will be covered in the next three years. The Prime Minister noted over 1 crore families had given up LPG subsidy at his call.

“In the last 60 years, the work for women’s empowerment like this has never happened,” he said noting that health of poor women suffered due to burning of wood as fuel.

Claiming his government had shown how the poor can be empowered, Modi said over Rs 1.25 lakh crore was distributed among 3.25 crore such families under the Mudra loan scheme.

He told the gathering that being an MP from UP he was a ‘UP-walla’ and wanted to seek their blessings as he recalled it was around this time two years ago that his government had taken oath.

As the ‘Pradhan Sewak’, a term he has often used for himself, Modi said he is giving an account of his work to people.

Modi said the ratio of divisible resources between Centre and the states earlier was 65:35 which his government changed and now 65 per cent of the share was going to the states. Over Rs 2 lakh crore was given to panchayats, Modi said, underlining his government’s “commitment” to development of states and villages.

When he had taken over the reins, the dues of sugarcane farmers ran up to Rs 14000 crore, which had come down to about Rs 700-800 crore now due to measures taken by his government, Modi said and “warned” the sugar mill owners against treating the farmers the way they did in the past.

“We have taken a pledge that when the country celebrates 75 years of independence in 2022, we will double the income of farmers through implementation of various policies,” he said and listed a host of schemes launched for their benefit like soil health card and crop insurance.

Modi also called for judicious use of water, saying adequate amount of it will help farmers against all odds.

“I request you to save as much water as you can,” he said.

Modi is expected to address three more rallies in different parts of the country in the coming days.