Most awaited announcement in Union Budget: Roadmap to a common market

FM Arun Jaitley is likely to indicate a roadmap for rolling out the ambitious GST from April 1, 2016, when he reads out Budget for 2015-16. 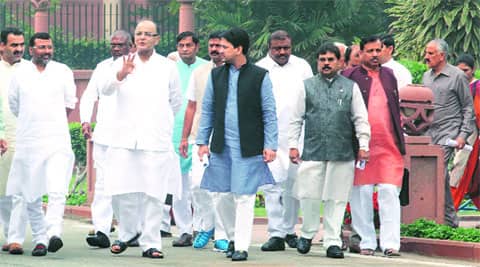 Finance Minister Arun Jaitley is likely to indicate a roadmap for rolling out the ambitious Goods and Services Tax (GST) from April 1, 2016, when he reads out the Budget for 2015-16, a signal important for both states and investors, who are looking for a stable and certain tax regime before making investment decisions.

A senior official told The Indian Express that while much of the blueprint for GST has already been laid down in the Constitution Amendment Bill, which was tabled in the Winter Session of Parliament, the details regarding the information technology (IT) preparedness for implementing the new indirect tax regime, the business processes, revenue neutral rate (RNR), and model laws for both Centre and states are in “the final stage and should be ready by April”.

“Over 70 per cent work on these aspects is already complete and we are confident that the April 2016 timeline will be met,” the official said, adding that the finance minister may dwell on the developments in the Budget while signalling the future course of action.

Industry has been long awaiting the implementation of GST, which will make the country a seamless market, while doing away with the cascading of several states and Central levies including excise duty, VAT, sales tax, octroi and entertainment tax.

The Bill for the introduction of GST, touted as the single biggest indirect taxation reforms since independence and a “win-win” for the Centre and states, was tabled on December 19 in the Lok Sabha.

However, tax experts said that the most important thing is the passage of the Bill, which will decide the design of the new tax regime.

Mahesh C Purohit, former member-secretary of the Empowered Committee of State Finance Ministers and currently director, Foundation for Public Economics and Policy Research, said that the “most important thing is setting up of the GST Council, which can be formed only when the Bill is passed.”

“The Council will decide the RNR, which in turn will decide the compensation each state will be entitled to after the roll out of GST. A roadmap is necessary but it can happen only when the law is prepared,” he said.

Satya Poddar, partner, EY, said that the government should come out with the roadmap as soon as possible and set up a task force of 30-40 officials from both the Centre and states to monitor and coordinate on the pending work on GST.

All the same, states’ officials say that despite the progress so far, challenges at the state level are multi-fold. A state official, who refused to be quoted, said that the one indication all the states would be looking forward to is the “pending compensation for phasing out the Central sales tax (CST)”.

“In the Budget, states are waiting to see the amount set aside for the CST compensation. That will give them the confidence to work on the GST,” the official said.

Apart from the CST compensation, the official added, there are several challenges, the prime being the model GST law, facing the states.

“Currently, not much work has happened on model laws for states. There were three sub-committees formed to draft various aspect of the law. Only one has completed the task so far. Further, the IT backbone for GST is still awaited as the GST Network (GSTN) is yet to finalise the business rules while few states don’t have the structure in place. The Centre has though promised to hand-hold such states,” the official said.

Another official from a manufacturing state said that the issues pertaining to clarity on place of supply rules, inter-state movement of goods and services and sensitisation of dealers and officials for the new indirect tax, are yet to be ironed out.

More Stories on
Union Budget
Next Story
Union Budget 2015-16 should address the technology need of the hour: NetApp