The government is committed to containing fiscal deficit at 4.1 per cent of the GDP this fiscal, Chief Economic Advisor Arvind Subramanian said. 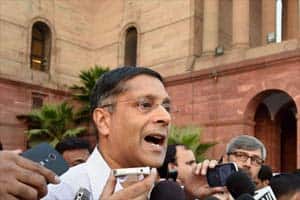 The government is committed to containing fiscal deficit at 4.1 per cent of the GDP this fiscal, Chief Economic Advisor Arvind Subramanian said today.

“For this year, we are committed to meet 4.1 per cent fiscal deficit target. I think we will have to re-evaluate the fiscal strategies generally … We will have to take overall decisions,” he said.

He was briefing media after the Finance Ministry tabled ‘Mid-Year Economic Analysis 2014-15’ in Parliament.

The review said: “The Government is committed to meeting the fiscal targets for FY 2015, despite the difficult odds engendered by a combination of these factors”.

“How ambitious a target was this? Evaluating the budget from the revenue side suggests that the target was ambitious,” it said.

It said evaluating the fiscal performance this year should take account of the legacy costs and the ambitious targets that were inherited.

The Budget inherited the targeted fiscal deficit of 4.1 per cent of GDP, down from 4.5 per cent in the previous year, the review said.

Subramanian further said with the new government there is a relatively “unencumbered political mandate” for decisive economic change and that is reflected in the actions that have been undertaken.

“The overall growth outlook has improved considerably,” he said, adding the possibility of public investment being an engine of growth, should be given more serious consideration.

On revenue mop up, he said the reason for the tax collection numbers “being not as bright as expected” is partly due to the optimism in the projections and lower economic growth than expected in the budget.

Talking about price situation, Subramanian said that the Finance Ministry’s assessment is that the decline in inflation is likely to continue with a strong potential for surprise on the upside.

To a question on gold, Subramanian said the pick up in gold import in November was partly because of holiday season and partly because genuine uncertainty about policy which leads people to hold gold.

He also said demand for gold went up because of high inflation (it become anti-inflation hedge) and world gold prices were going up.

“(Now) both those fundamentals have changed dramatically and we expect gold imports to remains steady going forward,” he added.