India has made a strong push for the Asean to wrap up an accompanying pact on the mutual recognition of educational and professional qualifications. 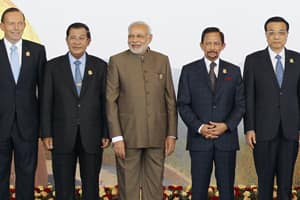 Two months after it signed a landmark free trade agreement (FTA) in services and investments with the Association of Southeast Asian Nations (Asean), India has made a strong push for the 10-nation block to wrap up an accompanying pact on the mutual recognition of educational and professional qualifications — an essential prerequisite for India to leverage its competitive advantage in the service sector.

In his address at the 12th India-ASEAN Summit here, Prime Minister Narendra Modi stressed on this issue and said: “I suggest that we conduct a review of our free trade agreement on goods to improve it further and make it beneficial to all. । also urge that the FTA on Service and Investment be brought into force at the earliest… We should move quickly towards mutual Recognition of Degrees”.

The reluctance of ASEAN members to ratify the mutual recognition of degrees pact stems from continuing apprehension on the impact that
this could have on their own services sectors. The Philippines, which is yet to ratify the overarching services agreement, had earlier raised concerns that opening up of the region’s services sector may have an “adverse impact” on its own services industry, given India’s strength in the sector.

When India signed the free trade agreement (FTA) in services and investments with the ASEAN on September 9, 2014, two years after the
discussions on the pact concluded, the pact had marked a halfway house of sorts. The benefits for India from the agreement, which was
expected to pave the way for India to leverage its competitive offerings in finance, education, health, IT, telecommunications, transport, movement of professionals and enabling Indian service providers to offer services to Asean customers with greater ease than what is possible currently, is unlikely to fructify in the absence of the mutual recognition agreements that essentially honours the educational and professional qualifications across India and the ASEAN. This is a problem that India already faces in case of similar FTAs in services that it has in place with Japan and South Korea.

The services pact — unarguably India’s strong point — with ASEAN was the first that India had signed with another trading country/bloc after the new NDA government took office in May this year. The delay in signing mutual recognition agreements stems from the opposition by some Asean countries to free movement of professionals, given rising unemployment in their countries. As a result, some of these countries are insisting that Indian professionals should obtain local qualifications; for instance, a doctor wanting to practice in Thailand must obtain a licence from Medical Council of Thailand.

Except for the Philippines, every other ASEAN country — Singapore, Malaysia, Laos, Cambodia, Brunei, Vietnam, Myanmar, Thailand and
Indonesia — has ratified the service deal.

India had implemented the FTA in goods with Asean members in 2010, while it had concluded the negotiations for FTA in services and
investments in 2012. With the signing of the pact in services and investments, the FTA is stated to become a comprehensive economic
partnership between the two sides, but for the hassle of the mutual recognition agreements.

It is learnt that Mode 4, — the movement of professionals — has also been incorporated in the services agreement, something which could benefit Indian professionals like chartered accountants and those from the IT and ITeS sector.

The erstwhile UPA-II government had come under criticism for signing free trade agreements “in haste” and losing out on the benefits
provided by the same. While India has an advantage in services, India’s existing trade balance with Asean is negative. India’s economic strength lies in services, given that over 50 per cent of GDP comes from services.

In December last year, the Union Cabinet had approved the FTA in services between India and the Asean. Unlike in India, Asean members
have to approach their respective Parliaments for ratification of such pacts.

However, following the criticism, the commerce department undertook a study to gauge the impact of the FTAs on India’s trade. India has
signed FTAs with countries including Korea, Japan, Singapore, Thailand and Indonesia.

The signed FTA is to be formalised under the umbrella framework of Comprehensive Economic Cooperation Agreement (CECA), which India and Asean inked in 2003. CECA — which has two components, goods, as well as services and investment — is similar to most FTAs, but earns the “comprehensive” tag by including investment. India has signed CECAs with Japan, Singapore and Australia.