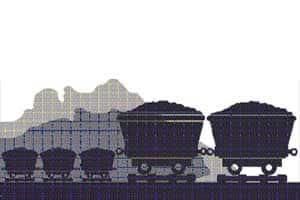 A joint call by five trade unions to strike work at the mines of Coal India and its subsidiaries disrupted production at some sites on Tuesday, even as it was hoped that a meeting called by the Centre in the Capital late in the evening could facilitate a formula that would coax the workers to resume work. The unions are protesting what they call an attempt to “denationalise” the monolithic coal producer through disinvestment while it is estimated a day’s loss of production at the PSU could cost the nation 1.3 million tonnes of the fuel — enough to run a 260 MW power plant at an optimum 85% plant load factor for a full year.

The actual loss on Tuesday, the first day of the planned five-day strike, however, was seen to be much less, as the PSU management could ensure moderate to normal attendance at many major mining locations. The strike came at a time when the PSU was scaling up output to meet this year’s production target of 520 million tonnes, given that its production in the first nine months of the fiscal was only two-thirds of the annual target.

“We hope the ice would break after the trade unions hold a meeting with the coal secretary,” a coal ministry official said.

But Jibon Roy of the CITU-backed All India Coal Workers Federation claimed the strike might even be extended if the ministry failed to agree to the unions’ demands. “We are opposing a follow-on public offer or any kind of disinvestment in CIL, which could later lead to privatisation of the firm. We oppose any kind of restructuring of CIL,” Roy said.

The five trade unions participating in the strike are BMS, INTUC, CITU, AITUC and HMS.

Roy claimed over 7 lakh wokers participated in the strike and it was the biggest industrial strike across sectors since 1977.

While SQ Zama, secretary-general of the INTUC-led Indian National Mine Workers Federation, said that 100% of CIL workers and 80% of Singerani Collieries workers took part in the strike, CIL officials said the strike was only partially successful. “There was 75% attendance in Eastern Coalfields,” Subrata Chakravarty, director, technical operations, said. The strike has mainly affected Bharat Coking Coal, Mahanadi Coalfields and Western Coalfields. South Eastern Coalfields (SECL) was partly affected with mining coming to a halt at Gebra Dipca and Kushmunda mines.

The government is tagetting to raise about Rs 22,500 crore 2014-15 via the proposed follow-on public offer of Coal India — the mainstay of its disinvestment plan for the year — with the targetted proceeds from PSU stake sales estimated at Rs 43,425 crore. Also, the coal Ordinance issued recently contained an enabling provision for allowing commercial coal mining by the private sector.

Although it was estimated that a day’s strike could result in a loss of production of 1.3-1.5 MT a day, Sutirtha Bhattacharya, the newly-appointed CMD of CIL, said the impact of Tuesday’s reduced attendance of workers on production could not be assessed immediately. “We are hopeful the situation will be resolved in an amicable manner. The precise impact of the strike would be known later and it will be premature if I predict anything at this juncture,” Bhattacharya said.