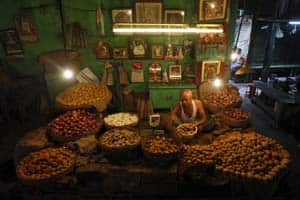 Retail inflation is likely to cross the 6 per cent level over next two months but will ease thereafter as food prices abate and the base effect normalises, says a report. (Reuters)

Build up inflation rate in the financial year so far was -0.85% compared to a build up rate of -2.33% in the corresponding period of the previous year.

Last week it was reported that Consumer Price Index (CPI) inflation for the month of March declined to 4.83% versus 5.18% in the month of February. This is much below consensus estimates of most analysts.

RBI governor Raghuram Rajan has said that inflation has evolved along the projected trajectory and the target set for January 2016 was met with a marginal undershoot. “Going forward, CPI inflation is expected to decelerate modestly and remain around 5% during 2016-17 with small inter-quarter variations,” said Rajan in the central bank’s monetary policy review.

However, in news that will bring cheer, the India Meteorological Department (IMD) has forecast an above normal monsoon this year. “Quantitatively, the monsoon seasonal rainfall is likely to be 106% of the Long Period Average (LPA) with a model error of ± 5%,” says IMD. IMD will issue the update forecasts in June as a part of the second stage forecast.