Telecom scam: ‘My suggestion to cancel licences was considered, but fear of litigation by licencees held govt back’ 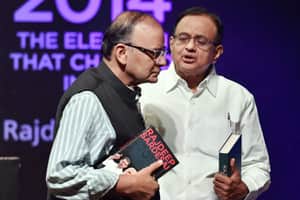 Former finance minister P Chidambaram on Friday said he had suggested to the UPA government to cancel 2G licences once it came out as a scandal. Though his suggestion was considered, the government decided to let the court take a call, perhaps due to apprehension of litigation by numerous licencees, he added.

Participating in a discussion with Finance Minister Arun Jaitley at the launch of Consulting Editor, The India Today Group, Rajdeep Sardesai’s book “2014: The Election That Changed India”, Chidambaram said the then prime minister Manmohan Singh “should have put his foot down” without waiting for the Supreme Court order.

“The issue of 2G licence could have been handled differently. The prime minister could have put his foot down and said I would not let you follow the first-come-first-serve policy… Or he could have cancelled the licences without waiting for the court order… Once it came out as a scandal, the government should have cancelled it… I suggested so and it was considered. But the decision was to let the court take a decision,” Chidambaram said. “If we had cancelled, we might have contained the damage. It was a pretty simple decision, rather than suffering a judgment,” he said.

According to Chidambaram, the Congress-led UPA would not have lost the elections so badly if the government had got the “economy right”. Chidambaram, who had moved from the Finance Ministry to the Home Ministry in the aftermath of the 2008 Mumbai terror attack, said the measures including the stimulus packages during the global crisis led to the government losing control over the domestic economy.

In the conversation moderated by Karan Thapar, Chidambaram said it was not just the 2G scam that led to the fall of the UPA government. “This election (2014) was an uphill task for us. Ten years in office and the anti-incumbency is a millstone around your neck,” he said. He added that the BJP would still have been the largest party.

Chidambaram also clarified that the controversial budget proposal on retrospective taxation could not have been taken without consultation with the PM. “It was a budget proposal… It was discussed between the PM and the finance minister only… I think the matter was discussed and what all I know about, I will say in the the book I am writing,” he said. Pranab Mukherjee, President of India, was the finance minister then.

Chidambaram, who recently suggested that Congress chief Sonia Gandhi and vice-president Rahul Gandhi should put in place an action plan for the party’s revival, however, refused to make any comments on Rahul’s leadership during the campaign. When Sardesai commented that Rahul, who seemed to have a split personality, had failed to be consistent in his decisions, Chidambaram said, “I don’t pry into the private lives of any leader.”

On Narendra Modi, to whom Rahul was often compared with, Chidambaram said, “(Prime Minister) Modi wears his political ambition on his sleeves. If you ask me I wouldn’t wear it on my sleeves. I wouldn’t make it so obvious. Politics means seize the opportunity and do it. You may have different views on it.”

He, however, acknowledged the 2014 election was “won by Modi” for the BJP. “He brought certain qualities which enhanced the quality of your victory. There is no denial. BJP’s magnitude of victory was attributed to his strategy,” he said, adding that the massive campaign, however, did not help the BJP win Tamil Nadu, Kerala, Orissa and West Bengal.