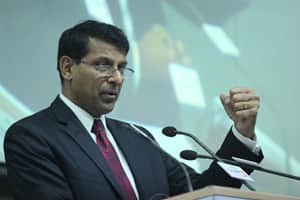 RBI Governor Raghuram Rajan today sounded a word of caution about the new government’s ‘Make in India’ campaign that assumes an export-led growth path of China and said instead it should be ‘Make for India’ that will produce for the internal market.

He also pitched strongly for some budgetary incentives for household savings that could help ensure that country’s investment is largely financed from domestic savings.

Domestic demand has to be financed responsibly as far as possible through domestic savings, he added.

Delivering the Bharat Ram Memorial Lecture on “Make in India, Largely for India”, Rajan commended the government’s aim of making more in India for which access to finance should be made easier.

“There is a danger when we discuss ‘Make in India’ of assuming it means a focus on manufacturing, an attempt to follow the export-led growth path that China followed. I don’t think such a specific focus is intended,” he said.

The Governor’s remarks assume significance in the context of the campaign of Prime Minister Narendra Modi, who had an announced an ambitious ‘Make in India’ programme in his Independence Day speech.

The governor said that the world as a whole is unlikely to be able to accommodate another export-led China. Industrial countries themselves have been improving capital intensive flexible manufacturing, so much so that some manufacturing activity is being “re-shored”. Any emerging market wanting to export manufacturing good will have to contend with this new phenomenon.

India would also have to contend with China when it pushes into manufacturing exports.

“I am not advocating export pessimism here– India has been extremely successful at carving out its own areas of comparative advantage, and will continue to do so.

“I am counselling against an export-led strategy that involves subsidising exporters with cheap inputs as well as an undervalued exchange rate, simply because it is unlikely to be as effective at this juncture”, he said.

Rajan said that he was also cautioning against picking a particular sector such as manufacturing for encouragement, simply because it has worked well for China.

“India is different, and developing at a different time, and we should be agnostic about what will work,” he said.

RBI Governor said that instead of subsidising specific industries because they are deemed important or labour intensive, the public goods each sector needs should be figured out.

He said the second possible misunderstanding was to see ‘Make in India’ as a strategy of import substitution through tariff barriers, a strategy that had not worked because it ended up reducing domestic competition, made producers inefficient and increasing cost to consumers.

Elaborating on the ‘Made for India’ concept, Rajan said if external demand growth was likely to be muted then India has to produce for the internal market.

“This means we have to work on creating the strongest sustainable unified market we can, which requires a reduction in the transactions costs of buying and selling throughout the country.

“A well designed GST bill by reducing state border taxes, will have the important consequence of creating a truly national market of goods and services which will be critical for our growth in the years to come,” he said.

Domestic demand has to be financed responsibly as far as possible through domestic savings. “Our banking system is undergoing some stress. Our banks have to learn from past mistakes in project evaluation and structuring as they finance the immense needs of the economy,” he said.

The RBI Governor said the system has to work on spreading financial services to the excluded because once they learn how to manage finances and save they can be relied upon to borrow responsibly.

“The income tax benefits for an individual to save have been largely fixed in nominal terms till the recent budget, which means the real value of the benefits have eroded. Some budgetary incentives for household savings could help ensure that the country’s investment is largely financed from domestic savings,” he said.

The Governor also argued for ensuring transparency and stability in the economy saying a sound fiscal framework around a clear fiscal consolidation path is critical. On the monetary side, a central bank focused primarily on keeping inflation low and stable will ensure the best conditions for growth.

“In reacting to developments, however, the central bank has to recognise that emerging markets are not as resilient as industrial economies.

“So the path of disinflation cannot be as steep as in an industrial economy because an emerging market is more fragile, and people’s buffer and safety nets thinner…Going forward we will discuss an appropriate timeline with the government in which the economy should move to the centre of the medium term inflation band of 2 to 6 per cent,” he said.

In addition to inflation, he said the central bank has to pay attention to financial stability. Referring to the Current Account Deficit (CAD) and said the best for of financing is long term equity that is Foreign Direct Investment (FDI) which has the additional benefit of bringing in new technologies and methods.

“While we should not be railroaded into compromising India’s interest to attract FDI — for example, the requirements to patent a medicine from India are perfectly reasonable, no matter what the international drug companies say — we should ensure policies are transparent and redress quick,” he said.

More Stories on
Make In IndiaRaghuram Rajan
Next Story
Notices to telecom cos for under-reporting of Rs 10k cr: Govt