Must Read
As WazirX battles on against Binance, what will be the impact on the brand
Gold Price Today, 11 August 2022: MCX Gold prices may trade in Rs 51800-52250 range, support at Rs 51800
China reports cases of Langya virus. What is this new zoonotic disease that has infected over 30 people?
Central Vista: Efforts underway to hold Winter Session in New Parliament building
Pause slide 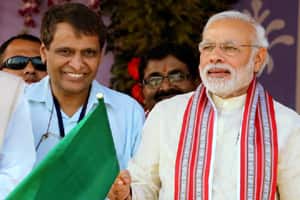 In line with Prime Minister Narendra Modi’s “Make in India” campaign, Railway Minister Suresh Prabhu has finally given green signal to the two much awaited big-ticket FDI proposals for setting up diesel and electric locomotive plants in Bihar at a cost of Rs 2,400 crore.

Ending the suspense over the fate of Madhepura electric locomotive plant and Marhora diesel locomotive plant, Railways has finalised the financial bidding for the high-value joint venture projects after considerable delays, re-thinking and prolonged due diligence amid repeated revision of bidding documents.

The Request for Proposals (RFP) containing financial bidding documents for both the plants are ready and the shortlisted bidders have been intimated the same, said a senior Railway Ministry official.

Also Read
US inflation falls more than expected in July to 8.5% as petrol gets cheaper, eases pressure on Fed
Cathie Wood says US economy in recession but don’t worry, good times are coming
India may grow at 8.2% over next decade; Goldman Sachs chalks out 4 growth levers
Switzerland seeks fast conclusion of India FTA talks

While four global firms — Alstom, Siemens, GE and Bombardier — have been shortlisted for the proposed electric locomotive factory at Madhepura, two multinationals — GE and EMD – are vying to bag the diesel locomotive plant at Marhora.

The estimated cost of the factories is about Rs 1,200 crore each. The financial bidding will be opened on August 31 and there will be two pre-bid meetings held in between, the official said.

With the government allowing 100 per cent FDI in the railway sector, setting up of the two locomotive plants in joint venture model is crucial for Railways to give a boost to its infrastructure. The two projects are among top eight infrastructure projects being monitored by the PMO.

In the course of about 10 years after commissioning, the proposed Marhora plant is expected to manufacture about 1,000 diesel-electric locomotives, that is 100 locomotives annually.

The proposals for the diesel and electric locomotive factory in Bihar were announced in 2008 by the then Railway Minister Lalu Prasad.

Both factories are to be set up in PPP model and there are many changes in the bidding documents over the clauses of transfer of technology and maintenance since the announcement.

“In order to give a boost to the infrastructure sector, setting up of these two factories on PPP mode is crucial for the current economy scenario and the PMO is also monitoring these projects,” the official said.

Bidding documents were earlier discharged on November 2011 and Railways called for fresh proposals for the two factories.

Scope of maintenance work for the proposed factories was revised significantly and amended bid documents were approved by the Cabinet on January 20 last year and subsequently RFQ followed by RFP for both plants were finalised, the official said.