Kalvari is the first of the Indian Navy’s Scorpene class stealth submarines being built under the Project 75. 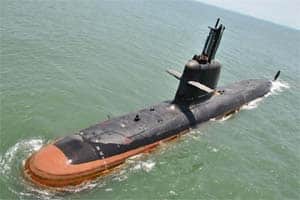 The submarine sailed out under her own propulsion for the first sea trial, off the Mumbai coast. (Source: MoD)

Kalvari, Indian Navy’s indigenous Scorpene-class submarine, hit the sea for trials on Sunday and with this milestone India’s defence preparedness is set to get a shot in the arm. (Also check: 10 stunning images of Kalvari submarine)

The submarine sailed out under her own propulsion for the first sea trial, off the Mumbai coast. A number of number of preliminary tests on the propulsion system, auxiliary equipment and systems, navigation aids, communication equipment and steering gear, various standard operating procedures were also validated for this new class of submarines. The submarine then returned to harbor in the evening.

During the next few months, the submarine will undergo a barrage of sea trials, including surface trials, diving trials, weapon trials, Noise trials etc. which would test the submarine to the extremes of its intended operating envelop. Thereafter she would be commissioned into the Indian Navy as INS Kalvari. Kalvari, upon its scheduled commissioning in 2016, would lend an enormous fillip to the Indian Navy’s underwater capability.

Kalvari is the first of the Indian Navy’s Scorpene class stealth submarines being built under the Project 75. The submarines are being built by Mazagon Dock Limited (MDL) in collaboration with France’s DCNS. In October 2015, the Scorpene-class submarine Kalvari had been set afloat. The remaining five boats of the Project 75 would be delivered by the yard to the Navy by 2020 and would form the core of the Navy’s submarine arm for the next two decades.

The Scorpene submarines would pack a potent punch. Kalvari would be equipped with anti-ship missiles and long range guided torpedoes along with modern sensor suite. A technology, called air independent propulsion system, will ensure that it stays underwater longer.

“It can undertake multifarious types of missions typically undertaken by any modern submarine i.e anti-surface warfare, anti-submarine warfare, intelligence gathering, operations by special forces and mine laying etc,” claims the Indian Navy. “The Scorpene Submarine is designed to operate in all theatres including the Tropics. All appropriate means of communications are provided to ensure interoperability with other components of the Navy,” the Indian Navy adds.

The Scorpene is equipped with Weapons Launching Tubes (WLT), and can carry weapons on board which can be easily reloaded at sea, through special handling and loading equipment. The array of weapons and complex sensors fitted on board the Scorpene are managed by a high technology Combat Management System, which integrates various diverse systems fitted onboard into one formidable whole.

Scorpene submarines are 67 meters long, 6.2 meters wide, and have 1,550 tones displacement. Even though it is powered by diesel, the 67-metre long submarine having 6.2 metre diameter has been designed to minimise noise and act with stealth in war theatres.

However, the plans to acquire heavy-weight torpedos for the submarine is stuck in the Defence Ministry even though the Navy had been pushing for it, citing national security imperatives.

WASS Italy, a Finmeccanica company, had emerged as a successful bidder in the procurement for the torpedos for Project 75 submarines.

Subsequently, because of the group’s alleged involvement in the VVIP helicopter case, the procurement was put on hold in July 2014.

Navy Chief Admiral R K Dhowan, while stressing on the importance of getting heavy-weight torpedos, has said that the Defence Ministry will take a final call on it.