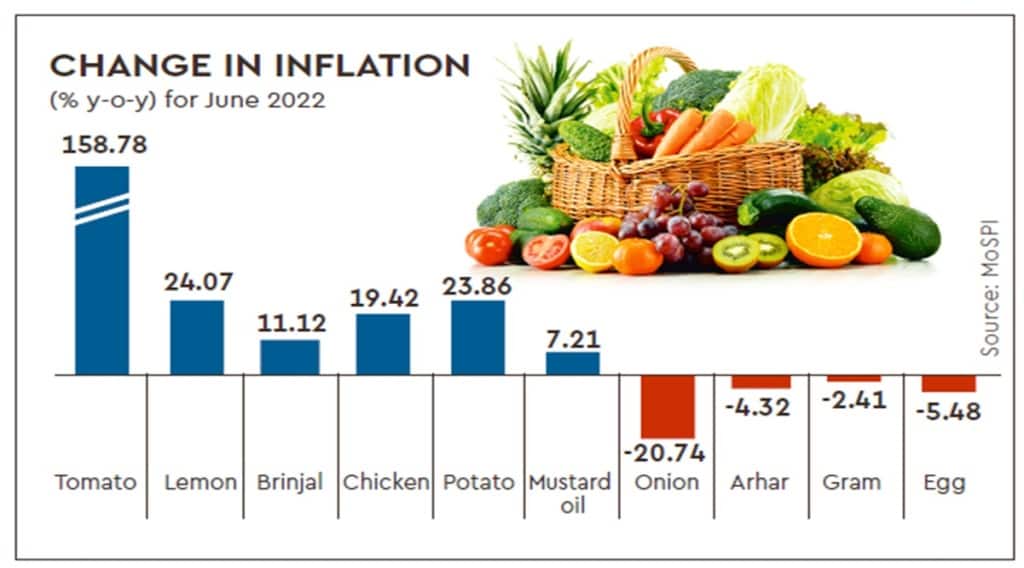 Trade sources said demand for poultry meat has been rising steadily since the beginning of the year, while prices have risen because of a spike in feed as well as fuel cost. (Representational image)

As retail food inflation remained above the headline print for the fourth straight month in June 2022 at 7.56%, a clutch of items like tomato, potato, chicken, wheat and edible oil saw the sharpest price increases. Food and beverage inflation in June saw a marginal decline to 7.56% from 7.84% reported in May. It was 8.1% in April. However, vegetable inflation declined to 17.37% from 18.3% in May, as a supplies of items like tomato, brinjal and lemon improved because of monsoon rain picking up pace in the later part of June.

Trade sources said demand for poultry meat has been rising steadily since the beginning of the year, while prices have risen because of a spike in feed as well as fuel cost. “Broiler meat prices are expected to decline this month because as feed prices have started to moderate and there will be less demand of the meat because religious reason with commencement of month of Sravana,” Ricky Thaper, treasurer, Poultry Federation of India, told FE.

The edible oil and fat category saw inflation at 9.36% in June 2022, mostly contributed by sharp spikes in domestic prices of edible oil in the last one year.

For mustard oil, inflation was 7.21% in June 2022. Inflation in refined oil (sunflower, soyabean and palm) was 14.63% because of a rise in global prices of edible oil, pushing up domestic prices. However, in the last one month landed prices of palm oil, which has a share of more than 60% in India’s import basket, has declined by more than 33% from the levels prevailing a month back. Similarly, the landed cost of crude soyabean and sunflower oils declined by 24% and 14% respectively in the last one month. Edible oils makers will be announcing retail prices cut soon because of softening of global crude prices. India imports about 55% of its annual edible oil consumption.