Barack Obama, who is arriving in New Delhi on January 25, will hold bilateral talks… 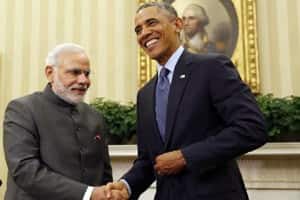 US President Barack Obama is visiting India with a jumbo delegation of over 100 people including the chiefs of big American conglomerates — United Technologies, PepsiCo, and Honeywell, among others — and will address a gathering of top corporate honchos from both India and the US jointly with Prime Minister Narendra Modi.

Official sources told The Indian Express that “the US has asked for 150 passes. CEOs of JPMorgan Chase, McGraw Hill, MasterCard, PepsiCo and Honeywell, will be accompanying Obama.”

From the Indian side, the official said, Cyrus Mistry, chairman of Tata Sons; Mukesh Ambani, CMD of Reliance Industries; ONGC CMD Dinesh Sarraf; Gautam Adani, chairman of Adani Group and Vishal Sikka, CEO Infosys, among others, would be attending the joint address.

Heads of both the Indian and US companies would make short addresses to the two leaders, after which Modi and Obama will address the gathering, according to the draft schedule.

Apart from those travelling with Obama for the CEOs meeting, several top American CEOs are travelling to India separately. Obama, who is arriving in New Delhi on January 25, will hold bilateral talks and delegation-level meetings on the same day. Later during the evening, he along with Modi will attend India-US CEO round-table.