Job growth falls in India, down to lowest in 3 quarters

Employment generation in eight crucial sectors in the third quarter of 2014-15 dipped to its slowest pace in three quarters. 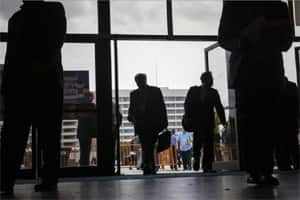 83% agrees that their job offers more opportunities for growth, compared with jobs in India, the survey results said. (Reuters)

Even as India is poised to emerge as the fastest growing economy in the world, employment generation in eight crucial sectors in the third quarter of 2014-15 dipped to its slowest pace in three quarters.

Just 1.17 lakh new jobs were created in eight key sectors of the economy between October and December 2014, according to a survey by the labour bureau. In contrast, 1.58 lakh jobs were created in the previous quarter ended September 30, 2014 and 1.82 lakh in April-June 2014.

With auto sales rising a dismal 2.64 per cent in March, the sharpest deceleration in employment generation in the third quarter was registered in the automobile sector with 23,000 jobs lost, followed by 20,000 jobs lost in the metals sector. Other sectors that reported job losses include gems and jewellery, handloom and transport.

Despite this tapering, service industries like IT-BPO and textiles (including apparels) generated the largest number of jobs in more than a year, hiring 89,000 and 79,000 respectively.

Analysts, however, believe that the data is in line with the performance of the industrial sector. The index of industrial production showed some recovery and grew 5 per cent in February this year, almost double the pace it grew in the previous month.

“If you look at the data with the pattern in the industrial output, it is not too surprising. The non-farm sector has been under stress for some time and with pressure on their top line and bottom line, companies have tried to improve margins by focussing on the bottom line through cost cutting measures,” said Sunil Sinha, director (public finance), India Ratings.

The data however, indicates that in expectation of some kind of a recovery in economic activities, firms hired more direct or permanent workers than contract workers in the third quarter of last fiscal. As many as 1.01 lakh direct category workers were hired in contrast to just 16,000 contract workers hired in the period.