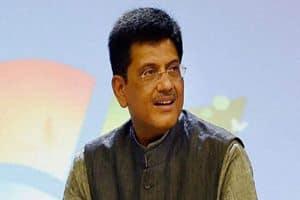 On hydro power, Piyush Goyal said, “The year 2016-17 is dedicated to hydro power. It got a push some 30-40 years ago, but in recent past it has been ignored due to huge challenges like local resistance and issues of land acquisition."

“I had a very good interaction with six financial institutions and banks this afternoon… The high level of integrity and good governance that has been the focus of Prime Minister Narendra Modi has excited investors who wished to commit large amount of capital particularly for the energy sector,” Goyal said here.

He was addressing reporters here at the India-Japan Strategic Energy Dilogue where CII is leading a high powered business delegation.

“Most bankers expressed deep satisfaction at the growing importance that Japan places on Indo-Japanese Strategic Partnership and wish to participate in this engagement,” the minister said.

The minister also had a meeting with top executives of Japanese companies like JPower and Hitachi.

“Almost unanimously all… have expressed great deal of satisfaction at the progress made by the new government in building up investors sentiments, allaying the fear of several investors developed in the last few years, particularly after the slowdown of the economy which was compounded with the series of litigations which tampared the investment moods,” he said.

However, he added that a few issues were raised by some bankers which were related to regulatory concerns both in the financial services and power sector and about health of the state distribution companies over the last few years.

“They have expressed satisfaction that the government is taking proactive measures to resolve these problems particularly through UDAY programme,” he said.

He added that they have also expressed satisfaction that Indian discoms and the government have never defaulted “due to which they feel great deal of comfort with Indian government.”