Govt has grand IT plans for India, but Narendra Modi’s Varanasi suffers from power cuts, congestion, even monkeys

As India launches an $18 billion plan to spread the information revolution to its provinces, the problems it faces are a holdover from the past – electricity shortages, badly planned, jam-packed cities, and monkeys. 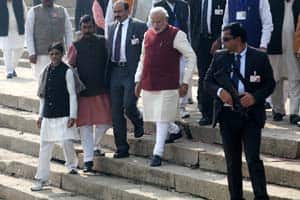 As Narendra Modi government launches an $18 billion plan to spread the information revolution to its provinces, the problems it faces are a holdover from the past – electricity shortages, badly planned, jam-packed cities, and monkeys.

The clash between the old world and the new is sharply in focus in the crowded 3,000-year-old holy city of Varanasi, where many devout Hindus come to die in the belief that doing so will give them salvation. Varanasi is also home to hundreds of  macaque monkeys that live in its temples and are fed and venerated by devotees.

But the monkeys also feast on the fibre-optic cables that are strung along the banks of the Ganges river.

“We cannot move the temples from here. We cannot modify anything here, everything is built up. The monkeys, they destroy all the wires and eat all the wires,” said communications engineer AP Srivastava.

Srivastava, who oversees the expansion of new connections in the local district, said his team had to replace the riverside cables when the monkeys chewed them up less than two months after they were installed.

He said his team is now looking for alternatives, but there are few to be found. The city of over 2 million people is impossibly crowded and laying underground cable is out of the question. Chasing away or trapping the monkeys will outrage residents and temple-goers.

Varanasi is part of the parliamentary constituency of Prime Minister Narendra Modi, a Hindu nationalist leader who came to power last May.

A shortage of electricity is further complicating efforts to set up stable Wi-Fi in public places – daily power cuts can last for hours during the sweltering summer in Varanasi and across much of India.

Varanasi was the first of an eventual 2,500 locations singled out for street-level Wi-Fi.

Industry experts predict that the broadband initiative, along with a surge in smartphone ownership, will mean about a third of Indians will have access to the internet by 2017, from about 20 percent, or 250 million people, now.

Expanding internet connectivity and making access cheaper could add up to 1.6 percentage points, or about $70 billion, to India’s GDP over a four-year period, consultants at McKinsey have estimated.

GLOBAL INTEREST
Global technology companies see opportunity in Modi’s commitment to a digital future and are adapting their products to India’s varied climates and external threats.

IBM is in discussions to provide software to help several cities make the leap into the digital age.

Network provider Cisco Systems is working with the government in the eastern city of Visakhapatnam to bring more education and healthcare services online, and has developed a “ruggedised” Wi-Fi box to survive India’s varied climates and cut down on the need for cables that will be at the mercy of the elements – or monkeys.

“You cannot predict what challenges you are going to come up against.”

Bringing some order to India’s chaotic cities with technology is a daunting task.

India’s urban population is forecast to swell by an additional 220 million to 600 million by 2031, potentially overwhelming already inadequate infrastructure.

Many of the new digital projects are simply aimed at improving existing civic amenities: time traffic information to help people better plan their journey, or systems that allow individuals to monitor water leakages or waste management and then inform local authorities.

“Everything here is old, outdated and the population pressure just makes it worse. This place was a small temple town and is now a commercial centre,” Tripathi said in his office overlooking the Banaras Hindu University.

The free Wi-Fi service that started in February is certainly stimulating the consumer economy. Boatman Sandeep Majhi makes a living ferrying pilgrims and bereaved families who scatter ashes in the river after performing cremations.

He recently purchased his first smartphone to download music and exchange videos with friends, and promote his boat business to tourists on Facebook.

But he said the government needed to pay equal attention to the municipal services in a city where cars, rickshaws and carts fight for space through narrow, potholed roads lined with litter. Varanasi remains dependent on a 500-year-old, leaky drainage system for its sewage.

“Free Wi-Fi is a good facility for tourists but I think the officials should think about cleaning the ghats,” said the 20-year-old, referring to the steps down to the river, which are often caked with cow dung.