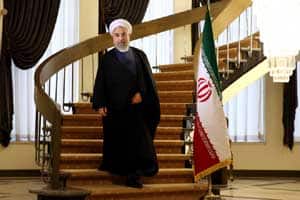 This was conveyed by Iranian President Hassan Rouhani in a meeting with Prime Minister Nawaz Sharif in their meeting here on the sidelines of the 71st UN General Assembly session. (AP)

Iran’s President Hassan Rouhani said on Friday that a framework for a nuclear deal was just the first step toward building a new relationship with the world, after Iranians greeted the announcement of the accord with celebrations in the streets.

U.S. President Barack Obama also hailed what he called a “historic understanding,” although diplomats cautioned that hard work lies ahead to strike a final deal. That work will include efforts by Obama to sell an eventual accord to critics at home, and to close ally Israel, which denounced the interim agreement and pressed for more safeguards in coming negotiations.

The tentative agreement, struck on Thursday after eight days of talks between Iran and six world powers in Lausanne, Switzerland, clears the way for a settlement to allay Western fears that Iran could build an atomic bomb, with economic sanctions on Tehran being lifted in return.

It marks the most significant step towards rapprochement between Washington and Tehran since the 1979 Iranian revolution,  and could potentially end decades of international isolation, with far-reaching political consequences in the Middle East.

In a televised speech on Friday, Iranian President Hassan Rouhani, a relative moderate elected in a landslide two years ago on a promise to reduce Iran’s isolation, said the nuclear talks were just the start of a broader policy of opening up.

“This is a first step towards productive interactions with the world,” he said.

“Today is a day that will remain in the historic memory of the Iranian nation,” he added. “Some think that we must either fight the world or surrender to world powers. We say it is neither of those, there is a third way. We can have cooperation with the world.”

The deal requires experts to work out difficult details before a June 30 deadline, and diplomats noted that it could still collapse at any time before then.

The agreement angered Washington’s closest regional ally, Israel. Prime Minister Benjamin Netanyahu declared it could lead to nuclear proliferation, war and even his country’s destruction. Israel believes Iran’s goal is to destroy it.

Netanyahu, who has the ear of Republicans who control both houses of the U.S. Congress, said the powers negotiating with Iran must add a new demand that Tehran specifically recognise Israel’s right to exist.

It appeared Netanyahu’s demand would be unlikely to be taken up, even if the Obama administration is sympathetic to his concerns. Asked whether its inclusion in the final deal would be appropriate, State Department spokeswoman Marie Harf told reporters in Washington: “This is an agreement that is only about the nuclear issue. We have purposefully kept that separate from every other issue. This is an agreement that doesn’t deal with any other issues, nor should it. And that’s what we’re focused on.”

Asked about Netanyahu’s demand, White House spokesman Eric Schultz said he had not seen the request but was aware of Israel’s ongoing concerns. “We understand his position,” Schultz told reporters. “The president would never sign onto a deal that he felt was a threat to the state of Israel.”

Under terms reached on Thursday, Iran would cut back its stockpiles of enriched uranium that could be used to make a nuclear bomb and dismantle most of the centrifuges it could use to make more. Intensive international inspections would prevent it from violating the terms in secret. Washington said the settlement would extend the “breakout time” needed for Iran to make a bomb to a full year, from 2-3 months now.

For Iran, it would eventually lead to the end of sanctions that have cut the oil exports underpinning its economy by more than half over the past three years.

Still, decades of hostility colour the relationship between Iran and the United States. Obama and Rouhani, who both took risks to open the dialogue with secret talks two years ago, will also have to sell the deal to sceptical conservatives at home.

U.S. Republicans have demanded that Congress be given the right to review the deal. The White House expressed confidence about hammering out final details as Obama called the four top leaders in the U.S. House of Representatives and the U.S. Senate – representing Republicans and his own Democratic Party – on Friday to discuss the framework agreement.

Celebrations, punctuated by honking car horns, erupted in the Iranian capital after the deal was reached.

Conservative clerics signalled their support on Friday, including on behalf of Ayatollah Ali Khamenei, the supreme leader, whose authority exceeds that of the elected president.

With Russia and China joining the United States, Britain, France and Germany as signatories to the deal, and even Iran’s Sunni Arab enemies cautiously welcoming it, Israel was the only country that publicly opposed it.

Iran’s other main foe in the region, Saudi Arabia, was more cautious, supporting the agreement in public, although its mistrust remains deep. It launched a bombing campaign a week ago against Houthis, Iranian allies in Yemen.

German Foreign Minister Frank-Walter Steinmeier said it was too early to celebrate. But he also said Israel should study the deal more closely before opposing it.

Saudi Arabia’s new ruler, King Salman, told Obama by telephone on Thursday he hoped a final nuclear settlement would “strengthen the stability and security of the region and the world”.

However, the Saudis and other Sunni Arab states are concerned about a deal that benefits Iran, the leading Shi’ite Muslim power, which they see as a dangerous rival expanding its influence in Iraq, Syria, Yemen and elsewhere.

The Wall Street Journal said on Friday the Pentagon has been upgrading the biggest bunker-buster bomb in its arsenal even as talks continued over Tehran’s nuclear program, readying a weapon that could destroy Iran’s facilities if negotiations failed.

Work to improve the design, guidance systems and anti-jamming capabilities on the so-called Massive Ordnance Penetrator began before the latest round of negotiations with Iran started. The most recent test of the 30,000-pound device was in mid-January, the Journal said.

The bomb was created to give the U.S. president options for attacking fortified facilities like Iran’s Fordow nuclear installation, which is built into a mountain.