Amid Iran reaching an agreement with six world powers on the contours of its nuclear programme, India is confident of ‘achieving a much smoother and easier mechanism of trade’ with that country now. 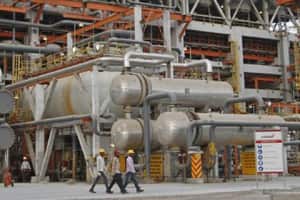 With the lifting of sanctions, Indian refiners are looking at raising import volumes with Iran. (Reuters)

Amid Iran reaching an agreement with six world powers on the contours of its nuclear programme, India is confident of “achieving a much smoother and easier mechanism of trade” with that country now. Commerce secretary Rajeev Kher would be visiting Tehran on Sunday to capitalise on the evolving situation and maximise the trade opportunity, official sources told The Sunday Express.

“India is Iran’s second largest importer of crude oil after China. For the first India’s imports of crude oil from Iran came down last month under the pressure of sanctions imposed by the US. This situation is likely to change now and the secretary’s visit is a step towards that.

Further, New Delhi will also take up the issue of increased import of rice by Iran. Rice is one of the major commodities exported,” the sources said.

The interim nuclear deal between Iran and the UK, China, France, Germany, Russia and the US, hailed as a significant step by India, will help it in again increasing oil imports from Tehran while at the same time making payment process much easier.

“Whatever bilateral relation is there between us, we feel mechanism of trade will become easier, our oil imports will become smoother and we expect oil prices will soften a little further,” the sources said.

Sources said that apart from rice Kher will also take up the issue of increasing bilateral trade in areas including meat, agricultural products, gems and jewellery, engineering, pharmaceuticals, automobiles and auto components. India will also discuss the ways to further strengthen the rupee-riyal mechanism, the sources added.

Amid the development, however, exporters are cautious. Ajay Sahai, director general, Fieo, said that with the likely lifting of sanctions, the advantage Indian exporters enjoyed so far in Iran may longer be able to do so in wake of the EU and the US players getting into the market.

“Areas where India already has strength may not get impacted but in other sectors Indian exporters will face competition,” he said.

New Delhi is also interested in developing infrastructure in Iran, mainly the International North South Transport Corridor (INSTC) that runs from Nhava Sheva in Mumbai to Bandar Abbas in Iran. From there on it goes to Amirabad, Iran or on to Astrakhan in Russia for onward shipment to Moscow.

The foreign trade policy unveiled earlier during the week also focuses significantly on improving bilateral trade with Iran. It says, “India’s exports to Iran have increased two-fold in the last couple of years. This has been facilitated by the Rupee-Riyal payment mechanism… The potential for bilateral trade, however, has not even been scratched on the surface.”

In view of this, the government is working on a strategy to increase project exports to Iran, especially in the railways sector.