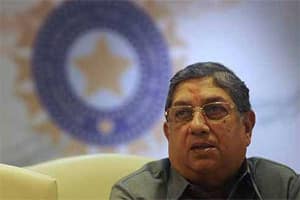 ICC chairman N Srinivasan, along with three other cricket officials, were issued notices Friday by the Supreme Court after their names appeared in the report of the justice Mukul Mudgal probing fixing allegations in the Indian Premier League.

Incidentally, the court inadvertently revealed the names of three cricketers during the hearing but later directed the media not to print them.
The court said lawyers of the four “non-playing actors” mentioned by the Mudgal’s committee would get a redacted report without the names of the players. This was done since these players aren’t being represented in the case.

“We can’t withhold the report from you because your arguments will be on the basis of the report,” the court said. The copies of the report will now be given to the four named who have until November 24 to submit responses. The report’s content still remain secret but the court did mention “several findings in the report indicting some individuals”.

BCCI counsel AN Sundaram also gave an undertaking to the court that the BCCI elections, which were scheduled to be held on November 20, will now be deferred for four weeks.

During the hearing, senior advocate Kapil Sibal sought directions from the court to hold the elections, but the court refused to give any order, observing that there were “many issues”.

After the court hearing, the BCCI faction opposed to Srinivasan didn’t seem too pleased by the decision to postpone the AGM. Former BCCI president Shashank Manohar, in a press statement, said: “During the hearing before the Supreme Court, the names of N Srinivasan, Sundar Raman, Meiyappan and Raj Kundra are disclosed. This means that the said persons are prima facie indicted in the report.”

Court notices to the four officials come nearly six months after IPS officer BB Mishra and the police departments of Delhi, Mumbai and Chennai started investigating the case. The SC empowered the Mudgal panel to carry out search-and-seize action but restrained it from making any arrest on its own.

The IPL fixing scandal broke last year after the arrest of high-profile cricket players and alleged bookies. The Mudgal committee was appointed by the Supreme Court in October 2013.