With govt giving a clear push to city infrastructure, it would make sense to build transport, water, sanitation and power infrastructure with optimum physical resilience. 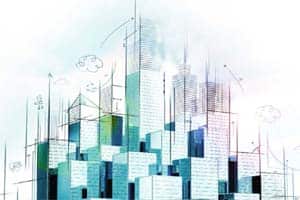 Around 10,000 lives were lost, houses and city infrastructure got destroyed across Nepal and Northern part of India in the earthquake in April this year. This came as a reminder to Indians, especially those living in high rise urban dwellings in the northern part of the country, that their habitation falls in either of the siesmic zones 3,4 or 5 with zone 5 being most prone to earthquakes.

According to the Government of India, at least 38 cities lie in high-risk seismic zones and almost 60 per cent of the landmass of the subcontinent is immensely vulnerable to earthquakes or other natural disasters. The fact that a large section of the population is poor and lives in houses and cities that are hastily built and are not earthquake resistance raises the risk of human impact, in case of any disaster. Also, the lack of government’s preparedness to deal with such situations may add to the woes.

While the Indian government has embarked upon building urban infrastructure across the country and develop 100 smart cities over the coming years, it is important that cities and infrastructure being built take into account the topography and vulnerability of the area to various hazards.

A report prepared by the World Bank on urbanisation in South Asia states that while the risks are high and growing on account of rising population density in urban areas, government’s need to plan more resilient cities and policy makers need to plan holistically to deal with any situation. The report enlists four recommendations that policy makers of a country need to take into account.

Urban population in South Asia has increased 130 million since the turn of the century and between 2011 and 2030, over 300 million inhabitants are expected to get added to urban population.

Importantly, most of the migration and rise in urban population has largely been unplanned and has resulted into concentration of the poor population in risk-prone areas, thereby increasing their exposure to natural disasters.

World bank states that while these countries have strengthened their institutions to mitigate problems of natural hazards, these institutions have not been allowed to influence overall planning and development. Urban risks and exposure.

According to the report 80 per cent of major South Asian cities are exposed to floods, with about 45 per cent falling in flood-prone areas and 14 per cent in extremely flood-prone areas. It also suggests that as much as half of all future urban expansion could be in flood-prone areas. Other than this, cities in Afghanistan, Nepal, Pakistan, and northern India that lie along the Himalayan range are all at risk of earthquakes. Many cities in northern India and Pakistan are also at risk of heavy inland flooding. This underlines the need for anticipatory planning and steps to mitigate risk.

The report points that policymakers should focus their DRM efforts on highly vulnerable large cities with high present and future risk.

While South Asian countries’ response to disasters so far has been reactive, some have begun planning to increase their resilience and reduce negative impacts of disasters, including integrating DRM in their national planning frameworks. The need is to have spatial planning and creation of formal land and housing markets that leads to urban resilience by limiting unplanned development.

The first step in developing a resilience strategy is to identify risks at national and city level. It is also important to identify the vulnerabilities of communities and potential exposure to disasters. Urban risk assessments aim to identify critical infrastructure and develop early warning systems.

With Indian government embarking upon developing infrastructure across cities, it would make sense to build transport, water, sanitation and power infrastructure with optimum physical resilience and not overlook them to save on marginal costs.

Also, since many cities are densely populated, it is not realistic to relocate millions of people away from their homes and jobs and so, “Cities can revisit urban design and ensure enforcement of building codes and land-use plans to minimise or prevent further building in risk-prone areas and to reinforce structures so that they are resilient to various hazards,” said the World Bank report.

Substandard construction practices have to be stopped, city authorities have to provide incentive for enforcing building codes as it would reduce post-disaster cost.

The report states that that the problem in South Asia is that it lacks empowerment of city leaders. “City leaders should, in planning to fill the huge infrastructure gap, consider future risks and hazards, and ensure that the new infrastructure is not built in hazard-prone areas and does not expose communities to additional risks,” said the report.

While low and medium risk incidents can be financed through contingent budgets, reserves, and annual budget allocations, “High-risk layer (major disasters) have to be paired with catastrophic risk transfers such as parametric insurance and catastrophe bonds,” the report pointed out. A detailed risk assessment is necessary for designing a national catastrophe risk strategy. While several South Asian countries have developed financing programs for disasters, the most extensive risk financing is in Sri Lanka. It is the first country to develop a “catastrophe draw down option” with assistance from the World Bank through a development policy loan. “The loan provides a line of credit that can be drawn on partially or in full if the country d clares a state of emergency after a natural disaster.”