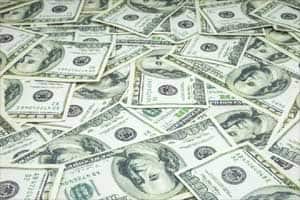 India’s foreign exchange reserves zoomed to new high of USD 327.88 billion, up by a whopping USD 5.845 billion, in the week to January 30 mainly on account of robust FII inflows and lower dollar outgo.

After the Narendra Modi government came to power in May 2014, foreign funds pumped dollars into Indian equities on the hopes of big-bang economic reforms.

In 2014, FIIs pumped in USD 16.15 billion into Indian equities, while they have exhausted the cap of USD 30 billion in government securities. They have parked USD 32.5 billion in corporate bonds, which is 64 per cent of their cap of USD 51 billion.

“We grow more confident of our call that RBI Governor Raghuram Rajan will continue to buy forex reserves to guard against contagion,” Bank of America Merrill Lynch (BofAML) said in a report today.

The RBI Governor in a post-policy meeting with reporters earlier this week had said the country’s foreign reserve position has improved substantially to sustain any spillover effect arising out of the policies from advanced economies.

“Our reserves are substantially higher even net of forward positions, which today are positive rather than negative last year and therefore I think we are in a much better position,” Rajan had said.

He said although India cannot be immune from volatility, but it is much better than many of its comparative countries.

BoFA-ML said if crude oil price persists at USD 50 per barrel levels, the RBI should be able to take import cover to 10 months by March 2016, above the critical 8-month import cover needed for the rupee stability.

Market experts believe the rise in the reserves is also due to the buying of dollars by the RBI in the past few months.

“We do not intervene to try and target a particular level for the exchange rate. Where we do intervene is to reduce volatility and we have intervened in both directions in recent months and weeks, so we both buy and we sell,” Rajan had said.

RBI has been net purchaser of dollars for the most part of the current fiscal.

So far this fiscal, besides spot purchases, RBI has bought USD 39 billion in forwards since April. If it consistently buys forex, the BOP can reach 10 months’ import cover by March 2016, provided oil at USD 55 a barrel in FY16.

The increase in reserves in the reporting week was on account of higher foreign currency assets (FCAs), which forms a major constituent of overall reserves.

FCAs, expressed in dollar terms, include the effect of appreciation and depreciation of non-US currencies such as euro, pound and yen held in reserves.