India’s expenditure on railways to exceed China’s in a decade: Suresh Prabhu

Suresh Prabhu feels that in the coming years the only two countries that will spend massively on railways are India and China. 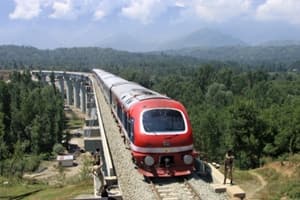 Indian Railways has over 600 major projects of network expansion and modernisation costing around Rs 4.5 lakh crore out of which many projects are being delayed for years. (Image: Indian Railways)

Prabhu feels that in the coming years the only two countries that will spend massively on railways are India and China. “In my opinion, only two countries will spend a lot on railways, one is China the other is India. China is miles ahead of us, we will catch up in one decade,” Prabhu said. “What we plan to invest in five years, China has been investing every year. As we go along we must increase our capital expenditure because we have to catch up with a lot of inaction in the past, we must do more,” he added.

Addressing the 40th Annual Day function of IRCON International, Prabhu said, “While we look out for international market, we cannot ignore domestic market because that will also grow exponentially and if that has to happen, IRCON must strategise on how to capture the domestic market.” “IRCON should become growth engine for Indian Railways, just like PM says that Railways should be the growth engine for Indian economy,” he said.

Plagued with a long spell of underinvestment, Indian Railways is also firming up a plan for infrastructure development with an ambitious target of pumping in more than Rs 8 lakh crore over the next four years.

As per the plan, while part of the funding will come from the capital expenditure provided for in the Rail Budget, a major chunk is expected to come from outside the budget through PPP and multilateral funding.