Inland Waterways Authority of India (IWAI) plans to table a restructured Indian Vessels Act of 1917 in the next session of the parliament to settle with the rules of sailing on the river that has been declared as national waterways. 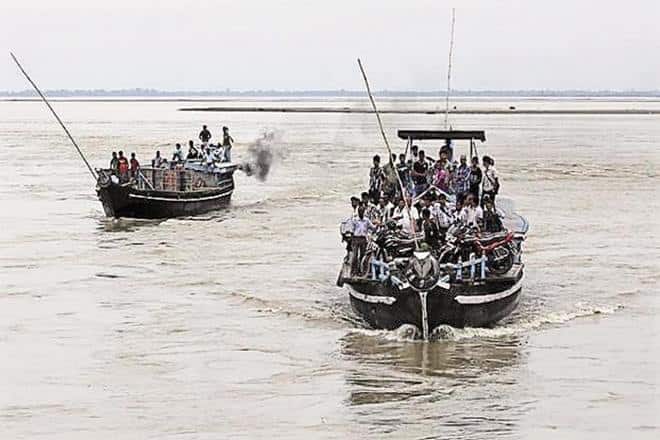 IWAI would standardize the practices on the river with a view that normal course of flow of the rivers are not changed in course of constructing jetties and creating other infrastructure on the rivers. (Representational Image: Reuters)

Inland Waterways Authority of India (IWAI) plans to table a restructured Indian Vessels Act of 1917 in the next session of the parliament to settle with the rules of sailing on the river that has been declared as national waterways. The government has declared 111 national inland waterways across the country and statutory provisions will have to be made to govern the waterways. Prabir Pandey, vice chairman, IWAI, on the sidelines of a seminar told Fe the restructured draft amendment bill has already got clearances from the cabinet and the parliamentary stand. ing committee on transport and shipping. “We hope the parliament to pass the bill in the next session,” Pandey said. Although the Indian Vessels Act of 1917 is being introduced as an amendment bill, the entire act has been restructured.

IWAI would standardize the practices on the river with a view that normal course of flow of the rivers are not changed in course of constructing jetties and creating other infrastructure on the rivers. “We are standardizing the designs of the vessels, which would sail with cargo on the river,” Pandey said adding while IWAI has roped in DST of Germany to design the vessels, the designs would be open to all barge and vessel manufacturers for adoption.

IWAI is creating an intellectual property of 14 vessels on the Ganges, the first of its kind in India and would take the intellectual property right from DST Germany. The designs of the vessels would be put up on the website for any manufacturer to access free of cost. DST was engaged through an international bidding process and was asked to design 14 vessels including car carriers, bulk cargo, liquid tankers Ro- Ro vessels and LNG powered vessels. The vessels has been designed to carry as much as 20,000 tonnes.

IWAI would develop 45 meters wide channels so that vessels of 110 meters long and 12 meters wide could easily fit into these channels. There would be 7 years assured depth dredging contract providing a depth guarantee of at least 3 meters. While dredging between Haldia and Farakka would cost Rs 100 crore for seven years, dredging between Farakka and Barh and between Barh and Varanasi would cost Rs 400 crore and Rs 350 crore respectively for 7 years.

“We have already received the designs for the first five vessels. An expert committee with top level architect from IIT, Kharagpur and Indian Institute of Shipping are at present examining the designs. Once these design gets approved, IWAI would do a model testing on National Waterways -1 before putting it on website for manufacturers to access,” Pandey said. IWAI held stake holders conference before the designs were finalised, and took random suggestions through conferences in Kolkata, Mumbai and Delhi. By August the designs would be on the website. In another 9-12 months the vessels would physically arrive. The vessels would be simultaneously launched with the multi modal terminals becoming operational by the first quarter of 2019 on NW-1. There would be three muti- modal terminals at Haldia, Sahebgunj and Varanasi and two inter modal terminals at Gazhipur in Uttar Pradesh and Kalughat in Bihar.

IWAI would procure some vessels via the tender route based on the designs following which private players are expected to procure vessels of standardized designs.

“It is not that vessels not standardized would not be allowed to sail on the waterways but such vessels would not be covered under statutory sageguards”, Pandey said.

IWAI has also mulled a freight village in Varanasi, which would be like a logistics hub catering Inland Waterways with cargo. The Port of Hamburg, which has done the traffic projection study, have projected traffic of 22 million tonne by 2020 and 45 mt by 2030. IWAI officials would soon hold a meeting with the UP government officials for finalizing the plans of a freight village, Pandey said.