Indian richest own more than half of the wealth in India; second most unequal country in the world: Report

According to a World wealth report, top one percent of the Indian population have more than half (58.4 %) of the wealth in the country. 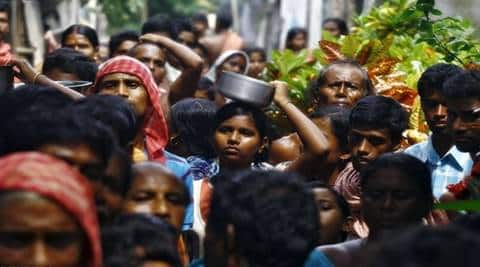 Credit Suisse's Global Wealth Report of 2016 found that India is the world's second most unequal country, after Russia. While Russia's 74.5 percent of the wealth is controlled by the richest 1 percent of the population, India stands at 58.4 percent. (Pic: Reuters)

According to a World wealth report, top one percent of the Indian population have more than half (58.4 %) of the wealth in the country. Credit Suisse’s Global Wealth Report of 2016 found that India is the world’s second most unequal country, after Russia. While Russia’s 74.5 percent of the wealth is controlled by the richest 1 percent of the population, India stands at 58.4 percent. Thailand comes a close third with 58 percent. The report said that the world, till the economic recession, was getting more equal but the trend got opposite after the crisis.

Altogether the report said that wealth inequality was one of the biggest issues ‘in almost every part of the world’. The report said, “Our estimates suggest that the lower half of the global population collectively owns less than 1 percent of global wealth, while the richest 10 percent of adults own 89 percent of all wealth, with the top 1 percent accounting for half of all global assets.”

Meanwhile, similar countries in terms of population, India and China have a huge gap in the report. China scored 43.8 percent on the list. However, the report said, “Currently, an estimated 9% of adults globally are net debtors, which is without a doubt a worrying development. Our calculations suggest that 80% of adults in India and Africa belong to the bottom half of the global wealth distribution.”

According to the report, property and other real assets dominate the personal wealth in the country is, and make up 86 percent of estimated household assets. Meanwhile, though the wealth in India has been increasing, it does not reach every part of the country and to everyone. The report says, “There is still considerable wealth poverty, reflected in the fact that 96 percent of the adult population has wealth below the US $10,000, whereas this percentage is only 68 percent in China.”

Credit Suisse Research Institute produces a Global Wealth Report each year which is a source of information on global household wealth. According to the report, “global wealth has risen by $3.5 trillion to $256 trillion, which represents an increase of 1.4%.” The report predicted that by 2021, The global wealth will reach $334 trillion.