Rs 94,000 crore is capital expenditure, said Indian Railways, a quarter of it only on paper

Almost 15 per cent capex, or Rs 15,081 crore, shown by the Railways in 2015-16 represents work done by joint venture companies in the railway sector. 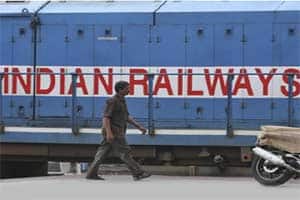 "I want to assure you that a direct train from north Gujarat to Mumbai will definitely start in near future. I will not give exact date, but it will 100 per cent start," Suresh Prabhu said. (Indian express)

The Indian Railways may have shown its highest ever capital expenditure of about Rs 94,000 crore in 2015-16, but around a quarter of that includes money extended to implementing agencies for works to be done in the future, equity infusion into rail PSUs, and even spending by others. The Railway budget had set a capex target of over Rs 1 lakh crore for the financial year.

Almost 15 per cent capex, or Rs 15,081 crore, shown by the Railways in 2015-16 represents work done by joint venture companies in the railway sector. The rail PSUs have minority stakes in these JVs and partnerships. Terming such spends as ‘Extra Budgetary Resource (Partnerships)’, the Railways has, for the first time, mapped and included these in its own capex.

“There is no doubt that a lot of money has been pumped into rail infrastructure. So much that last year, the Railways did not seem to know how to spend so much money. But there is also a tendency to present an appearance that a lot of work has happened, and that’s why probably they have shown a lot of things as capital expenditure. This is somewhat exaggerated. It’s new,” said A P Mishra, former Member (Engineering), Railway Board, and now president of the Association of Investors in Railways, a union of the JV entities in the rail sector.

Of the final capex figure of Rs 93,794.84 crore, Rs 37,744.87 crore was Gross Budgetary Support while around Rs 16,574.01 crore was from internal resources. The rest being from external sources, including borrowings, sources said the actual works added up to Rs 70,000 crore — still the highest ever, but not quite the targeted Rs 1 lakh crore.

In other words, without these components, the money spent on actual creation of assets in 2015-16 does not indicate phenomenal work.
Again, for the first time, SAIL, the only supplier of rails to the national transporter, was advanced Rs 1,000 crore barely a few days before the financial year closed, to procure rails in 2016-17. The Railways claims there were outstanding payments to the tune of Rs 500 crore to the steelmaker, and that given its expanded scope of work (the 2016-17 plan size of Railways is Rs 1.21 lakh crore), SAIL required to ramp up its production.

IRCON, the Railways’ engineering PSU, has been given “mobilisation advance” of around Rs 713 crore for the Kashmir link, a project being executed for years. Similarly, Konkan Railway Corporation, that is executing works in the Kashmir link, has been advanced Rs 365 crore for 2016-17. Another rail PSU, Northeast Frontier Railway, has also been extended a similar advance. Rail PSUs have been given Rs 700 crore to increase the pace of project execution in 2016-17.

For the Dedicated Freight Corridor, money has been given for land to be acquired next year. A tranche of Rs 932 crore was released on March 22, a week before the fiscal year ended, and another Rs 450 crore on the last day of the financial year.

Money has also been given (including funds drawn from the LIC loan) to recoup equity into Railway PSUs, like RVNL and IRFC, which is the Railways’ borrowing arm. The LIC loan amount drawn last year was around Rs 7,000 crore. The equity recouped in IRFC, which drew the loan to pass on to the Railways, was Rs 3,007 crore. Rail officials state this was needed to maintain a healthy debt-equity ratio so that IRFC could borrow more money. Officials also explained the equity infusion in RVNL stating its equity had eroded since the company had already utilised the money for projects.

Railway Minister Suresh Prabhu told The Indian Express, “We are bringing about a paradigm change. Mobilisation advances will help expedite work.” Financial Commissioner Sanjoy Mookerjee said there was a need to understand the perspective behind the advances made and equity infusion provided to rail PSUs.

In a written response, the Railways said, “The orientation of the CAPEX has moved from piecemeal execution of projects to holistic infrastructure augmentation… It is important to note that there is a set system for release of funds in Indian Railways… If projects have to be speeded up, then this can be done only by making available financial resources for all components thereof, to the agencies appointed for timely delivery of projects.”

But there have been concerns about funds lying idle. In his February 23 file noting at the time of approving the Revised Estimates for Railways (a copy of which is available with The Indian Express), Finance Minister Arun Jaitley had cautioned the Railways against “idle parking of funds”. “Keeping in view the resource constraints, it is suggested that the releases to Dedicated Freight Corridor and implementing agencies be continuously monitored to avoid idle parking of funds. This may be done by ensuring releases (of funds) against actual utilsations,” Jaitley said.

The Railways’ pace of works has been a matter of concern, with the Prime Minister’s Office raising it last September. The Finance Ministry had slashed its Gross Budgetary Support by Rs 12,000 crore citing the slow pace. Some of it was restored later.

When Prabhu had set the capex target at over Rs 1 lakh crore in his first budget, it didn’t quite seem the Railways would meet it. But the Railways showed significant spend in the last quarter. Financial Commissioner Mukherjee said January-March is the most productive time for works, which is not quite appreciated by others in the government.

Dinesh Trivedi, Chairman, Parliamentary Standing Committee on Railways, said, “It (Railway capex figures) gives me the impression that the Railways is going through unprecedented financial crisis wherein superfluous investment outlays are being made. It also gives me the impression that borrowings are being parked in terms of materials and advances being stacked because there is no capacity to utilise them.”