Travelling by train even after paying surge prices is cheaper than taking a flight on a low-cost carrier this festive season. 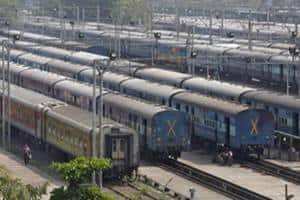 Travelling by train even after paying surge prices is cheaper than taking a flight on a low-cost carrier this festive season. (Reuters)

Travelling by train even after paying surge prices is cheaper than taking a flight on a low-cost carrier this festive season. For instance, a seat on the Rajdhani from Delhi to Kolkata by 2AC on the eve of Durga Puja on October 6 costs just Rs 2,961. That’s well below the fare of Rs 6,490 one would pay on SpiceJet. If one wants to take an Indigo flight, it would be costlier. Again, taking the Rajdhani from Delhi to Chennai by 2AC costs Rs 3,951 compared with Rs 4,250 on SpiceJet. Moreover, rail fares for Delhi-Patna are available for Rs 2,336 compared to Rs 3,947 being charged by Go Air.

Indeed, 2AC fares on most routes except Delhi-Bengaluru and Delhi-Mumbai are a shade lower than the corresponding air fares.

Airlines have been hoping to wean away passengers from railways after surge pricing was introduced last week. While the train fares so far appear to be lower than airfares — as obtained from the IRCTC website — they could change in the coming days as occupancies rise. However, travel agents say airlines too are likely to up their fares closer to the key festivals — Durga Puja and Diwali.

Also Read
India riding the tide as others struggle to float
No decision yet on extending PMGKAY beyond Dec: Food subsidy to cross Rs 3 trillion this fiscal
Finmin turns down proposal to expand tax remission scheme for exporters
Electoral considerations weigh on govt’s mind: Budget to steer clear of major reforms, PSB sale

However, those who fail to get confirmed train tickets can try their luck with Air India. The national carrier has introduced special discounted “spot” air fares on select routes close to the revised 2AC and 1AC fares. Spot fares can be availed of only four hours prior to departure. Price comparison for bookings done for October 6, between air fares of Air India and prevalent rail fares under the “flexi system”, indicate Air India’s air fares are lower compared to 2AC by Rs 5-50 on mostly trunk routes like Delhi-Mumbai, Delhi-Chennai, Delhi-Patna and Delhi-Ranchi.

Manish Rathi, CEO & Co-founder RailYatri.in, points out the biggest beneficiary of the boom in travel and tourism has been roadways which could pose some stiff competition for railways. “Train passengers are not as price sensitive as those who travel by air given there is no direct alternative to the railways. Nevertheless, they too are becoming more price conscious,” Rathi observed.

Domestic air traffic has seen double digit growth in the last two years; July saw the highest ever monthly growth in passengers of 26% year-on-year on the back of a drop in airfares. On the other hand, IR has seen a 3.2% y-o-y growth in the five months to August, in the non-suburban segment the highest revenue generating segment under passenger receipts.