India-US nuclear ‘breakthrough’ could be finalised within year 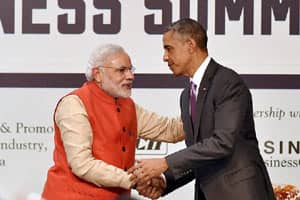 The January 25 announcement by Obama and Prime Minister Narendra Modi followed six weeks of intensive talks, but few details were released beyond a framework based on India’s acceptance of the principle that plant operators should bear primary liability in the event of a nuclear disaster.

Significant work remains on the fine print of a deal aimed at unlocking projects worth tens of billions of dollars that have been stuck the drawing board for years. India wants to nearly treble its installed nuclear capacity, which would make it the world’s second biggest market after China.

U.S. officials say details of an insurance scheme to protect suppliers from crippling lawsuits need to be thrashed out and India still has to ratify a U.N. nuclear convention. Indian officials do not rule out completing the process this year.

“We are committed to moving ahead on all implementation issues at an early date,” said Syed Akbaruddin, chief spokesman at India’s Ministry of External Affairs. “There are no policy hurdles left.”

General Electric and Westinghouse, a unit of Japan’s Toshiba, were fully briefed on the meetings of a nuclear “contact group” that hammered out the nuclear compromise in London, say sources with direct knowledge of the talks.

Bringing them into the mix was crucial because the prospect of huge lawsuits, like those against Union Carbide over the 1984 Bhopal gas disaster, has until now kept U.S. and other foreign firms on the sidelines.

India and the United States signed a landmark agreement to cooperate on nuclear power back in 2008. Yet an expected bonanza never materialised because India later passed a law that would expose reactor makers to liability if there was an accident.

The liability issue has became a metaphor for the unrealised potential of the bilateral business relationship and a question mark against Modi’s “Make in India” mantra.

As the days counted down to Obama’s visit, Indian officials persuaded their U.S. counterparts that their law was “not incompatible” with international standards that place the burden of liability on the operator, said one senior U.S. official.

New Delhi also proposed setting up an insurance pool with a liability cap of 15 billion rupees ($244 million). The state-run Nuclear Power Corporation of India would pay premiums to cover its liability. Suppliers would take out separate insurance against their secondary liability – which could not exceed that of the operator – at a “fraction” of the cost.

India must still ratify the International Atomic Energy Agency’s Convention on Supplementary Compensation for Nuclear Damage (CSC), which requires signatories to channel liability to the operator and offers access to relief funds.

“We would be looking at how quickly we can ratify the CSC – this is part of our assurance to the suppliers, along with the insurance pool,” said an Indian member of the contact group, set up by Obama and Modi at a Washington summit last year.

The U.S. official said Washington expects the Indians to ratify with the IAEA in the near future, along with documentation “stating what their law intends” on the issue of liability, which should offer further reassurance to U.S. firms.

A QUESTION OF DETAIL

The U.S. industry would have preferred the issue to be settled by amending the liability law, something considered politically impossible for Modi to achieve at the moment.

“We want to see all the detail before we say: ‘Yes, it works for us’,” Westinghouse President and CEO Daniel Roderick, who joined Obama’s delegation, told Reuters.

That note of caution, however, masks the extent to which negotiators engaged with the industry to address fears that it could end up on the hook in a disaster on the scale of the 2011 reactor blasts at Tepco’s plant in Fukushima, Japan.

“For the first time, we had a comprehensive inventory of concerns,” said the Indian negotiator.

Westinghouse has been granted land in Modi’s home state of Gujarat to build six reactors, while GE Hitachi Nuclear Energy is eyeing a similar project in Andhra Pradesh. The liability roadblock has prevented commercial talks from starting on the projects, with a combined capacity of 10,000 megawatts.

India has 21 nuclear reactors with an installed capacity of 21,300 MW. It plans to launch construction of 40,000 MW of capacity in the next decade.