India will sign a contract to develop Phase-1 of Iran’s Chabahar port during Prime Minister Narendra Modi’s visit to the Persian Gulf nation on May 23-24. 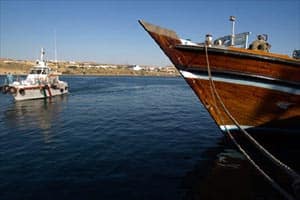 "Because the Chabhar port agreement is so important for both India and Iran, the project would continue irrespective of what the US says,"Ashley Tellis of Carnegie Endowment for International Peace said yesterday.(Reuters)

India will sign a contract to develop Phase-1 of Iran’s Chabahar port during Prime Minister Narendra Modi’s visit to the Persian Gulf nation on May 23-24.

Signing of the contract for Chabahar will be the highlight of Modi’s two-day visit to Iran during which he will meet Supreme Leader of Iran Ali Khamenei and President Hassan Rouhani.

An agreement for Exim Bank providing a USD 150 million line of credit for the development of the Chabahar port will also be signed, he said adding the Indian investment in the Phase-1 of the project would be in excess of USD 200 million.

“The visit of Prime Minister to Iran will mainly focus on connectivity and infrastructure, energy partnership with Iran, boosting bilateral trade, promoting regular consultation on peace and stability particularly in our region and extended neighbourhood and encouraging people to people contract,” he said.

Chabahar in southeast Iran will help circumvent Pakistan and open up a route to landlocked Afghanistan where New Delhi has developed close security ties and economic interests.

The two nations had in 2003 agreed to develop Chabahar on the Gulf of Oman outside the Strait of Hormuz, near Iran’s border with Pakistan.

But the project moved slowly because of western sanctions against Iran. The sanctions were lifted in January and since then India has been pushing for conclusion of an agreement.

The Indian company will undertake the development of two jetties in Chabahar port for a period of 10 years and will transfer all cargo consignments except for oil products.

From Chahbahar port, the existing Iranian road network can link up to Zaranj in Afghanistan, about 883 km from the port. The Zaranj-Delaram road constructed by India in 2009 can give access to Afghanistan’s garland highway, thereby establishing road access to four major cities — Afghanistan—Herat, Kandahar, Kabul and Mazar-e-Sharif.